An interesting story I did today is about how Toyota will start paying workers for what had previously been free overtime.
Called QC Circle, they are meetings that Toyota auto workers attend to talk about how they can improve production methods.
The issue is significant because “kaizen,” efficiency ideas from workers on the line and empowering workers, are all part of the Toyota Way.
Kaizen is crucial to the legendary manufacturing philosophy that make up the automaker’s sterling image.
But the story of the individual worker sometimes can be far more tragic.
Last year, the Nagoya District Court ruled in a lawsuit filed by the widow that the death of a 30-year-old Toyota employee was work-related, or karoshi _ death from overwork.
I looked at the court documents, and the glimpse they offered into this man’s life _ and death _ was heart-breaking.
He was doing more than 100 hours of overtime, sometimes working weekdays and holidays.
He was stressed out because his job was checking the car body for any defects, and pressures were high to catch them all.
This man had two young children, and in the beginning he was trying to also be the good father, and was giving them baths and playing with them.
Toward the end of his life, he no longer had the energy to do that, the court documents say, quoting his wife.
He was the team leader of one of these QC Circles, and the court ruled that such so-called voluntary work was part of the work (yes, real work) that contributed to his death.
One day, as he was filling in the records for defects, he collapsed from his chair.
He was rushed to the hospital but later died of heart failure.

Exchange on the Toyota Prius

Did Toyota’s Prius get Japanese government money?
That question has stirred up some talk.
It started with a Business Week report, which quotes a former Toyota executive as saying that it did.
That comment was just one line at the end of a long article.
But a person I got to know through blogging pointed it out.
So naturally I had to at least try and ask Toyota.
That produced this article.
Reaction was instantaneous:
One
Two
Three
Four
Five
Just some above and there’s a lot more, including the response from Toyota U.S. on its official blog, and a response from Business Week.
And another.
For me, it was this reaction that got me thinking I should get busy and find out, producing this story.
Also on Prius online.
The account with updates on this blog, and this one.
Topping it all, perhaps, in potential controversy is this. 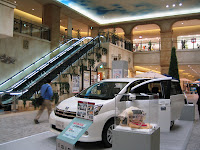 Talk about desperately seeking buyers.
Toyota is opening a giant shopping mall in Yokohama with 220 stores and restaurants, including Uniqlo, Wolfgang Puck’s and pastry stores, to be there where people hang out _ not wait for people to come to dealerships.
The scenario is that you introduce the idea of buying a car to people who are shopping.
Japan auto sales are falling lately to 27 year lows.
Analysts say people _ especially young people _ don’t want a car, even if they get one for free!
Kids who grew up in a more affluent Japan don’t covet the same status-symbol items their parents did.
Manufacturers have been struggling in recent years with the challenge of developing models that meet young people’s lifestyle needs.
Maybe one day there’ll be a hit car every Japanese is going to want _ like an iPod or a cell phone.

Getting to watch high-profile people up close is one perk of our job as reporters.
This week, I did an interview with Carlos Ghosn, the chief executive of Nissan and Renault.
I can only observe Nissan as an outsider.
But Nissan has changed over the last decade in one key, obvious and simple way: The makeup of the people who work there is more diverse.
It’s unclear whether that’s going to just slow down decision-making, or prove a gem of an asset for an automaker trying to expand in emerging markets in a world and industry that are increasingly global.
It’s a nice thought to think diversity produces winners.
But does it?
Toyota and Honda don’t have diverse management.
But they’re beating Nissan (profit, vehicle sales).
Obviously, a company’s success is so complex there are many factors that ultimately determine what happens.
And the significance of promoting diversity is likely lost on both sides of the Pacific _ in the U.S., because diversity is so commonplace, and, in Japan, because diversity is so rare.
For some reason, it’s charming to watch people from different nations talk English in heavy accents to make decisions at a big company.
Maybe it’s a reminder of how corporations, even big ones, are in the end about the individual people who work there.

What the executives of Toyota, Nissan and Honda chose to drive on to the stage at the Tokyo Motor Show was very telling.
Of course, Nissan’s Carlos Ghosn drove the GT-R.
My story on the Tokyo Motor Show.
Toyota’s Watanabe scooted out on a single-seater.
And Honda’s Fukui appeared in a ball-shaped fuel-cell car of silicone called Puyo (as in cuddly, friendly, rubbery “puyo puyo”)
My story on what Mr. Ghosn had to say.
Reporters get to carry around a ton of material automakers give out about their new models.
We trudge around massive Makuhari Messe from booth to booth, which are all packed.
The seats are all taken when the executives give their demonstrations so we’re on our feet all day.
Fortunately, there are also monitors to see what’s going on in case photographers’ heads are in the way.

The Tokyo Motor Show opens to the public in a week, and the day reporters run around at sprawling Makuhari Messe is Wednesday Oct. 24.
We already saw some models in previews:
My story on what Toyota is showing.
And my story on cute cars at the show.
The themes of Japanese-ness and cute culture have always fascinated me.
For decades of modernization, companies like Toyota were playing catchup with the West.
Now the time has come, in this age of globalization, for Toyota, and others, to strut their stuff as far as what’s unique about them as Japanese.
This is a very very difficult question.
You have to be unique if you want to compete.
But do you set off with the idea/goal of “wanting to be Japanese.” (or “wanting to be cute”)?
Being Japanese is what you end up being _ as a result of your being yourself.
No matter what you do, if you do it well, and you do it honestly, you can only be yourself.
And if you are Japanese, then your product will be Japanese _ without even trying.
A writer doesn’t sit down: Yes, I am going to write that great American/Japanese/Japanese-American novel.
If he/she does, it’s likely to be pedantic.
It’s backwards.
This is not to deny that it is critical and useful to recognize how you’re being yourself/Japanese.
By seeing the world, and studying diversity, a person gains insight into what is unique about a national culture _ and also what’s universal.

Reporters in Tokyo are very busy these days going to previews for the auto show coming up later in the month.
The automakers aren’t kidding when they call these models “concepts.”
That’s exactly what they are.
The guy with the sign is leading reporters to the Mazda cars . Nissan showed the playful Pivo today.
Amazingly enough I took photos for both previews.

Cars are usually unveiled in hotels, event spaces, company headquarters.
And so we knew something was up when Toyota invited us to a Lexus debut at the Fuji Speedway, near Mount Fuji and a two-hour bus ride from downtown Tokyo.
Professional drivers took reporters for two laps on the F-1 course, at one point reaching 240 kph.
That’s so fast your body feels as though it’s sinking into the seat, and you can’t hold your head up straight at corners (especially with the big helmet on our head that Toyota gave us to wear), and the rear wheels skid on the concrete as though we were in a racing video game.
“Anyone prone to carsickness?” the driver asks matter-of-fact after we get on board, as though we have a choice.
It was a bit reassuring the Lexus IS F comes with a computerizied pre-crash safety system, and the whole package of airbags (curtain/side airbags).
Akio Toyoda, the founder’s grandson, and other Toyota executives, showed up wearing black racing outfits.
Toyoda had his name and a Japanese flag embroidered on his belt.
It turns out Toyoda (that’s him in the photo above) has a racer license and was one of the drivers who took reporters out on the zippety ride.
The executive overseeing Lexus, Takeshi Yoshida, laughed: “I look like a ninja today.”
Going fast on a car is a lot of fun.
It’s so thrilling you forget your troubles.
And you remember that elation for days.

Father of the Z

Yutaka Katayama, known as Mr. K, was a key figure in building the Nissan brand in the U.S. back in those days when Japanese automakers were still the underdog in the industry.
The “Father of the Z” recently had his 98th birthday party.
He said he has never been a religious person.
But these days, he feels a larger spirituality beyond this reality/life _ something he says is common to all religions, even religions that are fighting each other.
He is always so full of life.
He talks with enthusiasm about the future of cars.
I interviewed him several years ago (although I can’t find it on the Web any more!).
As we get older, we may prefer to forget about birthdays.
But being there at a 98-year-old man’s celebration helps one understand why birthdays are important.

Not all auto workers are created equal. And the top Lexus workers are the cream of the crop.
They have impeccable touch, impeccable technique _ and from the way Toyota puts it even impeccable minds.
Reporters got a tour of the Tahara Lexus plant.
Part of the paint job a Lexus gets (and they get a few more coatings than your humble Corolla) is a rubdown by workers with almost loving hands as though they’re petting a thoroughbred race horse.
Toyota calls it “dojo.” There’s a lot of dojo-ism at any Toyota plant, but it’s taken to new heights at a Lexus plant.
The official there told us all the perfections they’d come up with for the first-generation Lexus, like all the pieces fitting just right in the interior, are already available for the Corolla.
And so the pursuit for ever higher perfection must always be at the heart of a Lexus plant, he says.
The tour itself was an exercise in Just in Time and effort at efficiency, and we were zipped around from one place to another, constantly being told we were falling behind schedule. And I felt a bit harried.
I guess I’ll never make it as a Lexus worker.