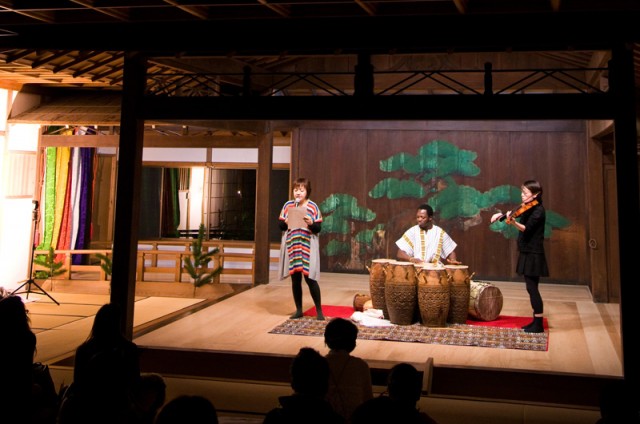 “Talking TAIKO,” a 2010 44-minute film directed by Yoshiaki Tago, expresses in pensive video the poetry of Yuri Kageyama, and explores her world through interviews and documentation of her readings with music. Tago has also made a film of the 2017 San Francisco performance of Kageyama’s “NEWS FROM FUKUSHIMA: MEDITATION ON AN UNDER-REPORTED CATASTROPHE BY A POET.”

Tago is a prolific director and producer in the Japanese TV and film worlds, having directed various feature films “Worst Contact,” “Believer” and “Maid in Akihabara.” His short “The Song of a Tube Manufacturer” won the runner-up prize at the Yasujiro Ozu Memorial Film Festival in 2013. He has served as film adviser for Takashi Murakami, and has worked with Nobuhiko Obayashi, Takashi Miike and Macoto Tezuka.

The film juxtaposes scenes from Japanese Bon Odori festivals and bustling Shibuya streets to underline the message of Kageyama’s poetry _ that being a poet is an extremely special and profound place to be, but is equally an everyday and essential way of life.

The collaborations of poetry with music with the young friends of her son and musician Isaku Kageyama emerge as key to her rediscovery of her poetic voice in Japan, a nation generally unsupportive of artists and women, especially those choosing English and poetry as the language of expression.

Tago has gently captured that development, adding his voice as an uncompromising collaborator, and finds himself and his filmmaking deeply affected by the experience.

Another work in which Tago and Kageyama collaborated is a music video of a 2010 concert by Yoichi Watanabe, master taiko drummer, Isaku’s teacher and founder of Tokyo taiko group Amanojaku, centered on his memories of Venezuelan drummer Eliazar Yanez, who studied taiko under Watanabe.

And Tago collaborated as a filmmaker in her Aug. 6, 2012, reading with American drummer Pheeroan akLaff at plan-B in Tokyo, showing footage from the disaster-ravaged Tohoku region and re-edited segments from “Talking TAIKO.”

Such collaborations developed into “NEWS FROM FUKUSHIMA: MEDITATION ON AN UNDER-REPORTED CATASTROPHE BY A POET,” which debuted at La MaMa in New York in 2015, and was presented at Z Space in San Francisco in 2017.