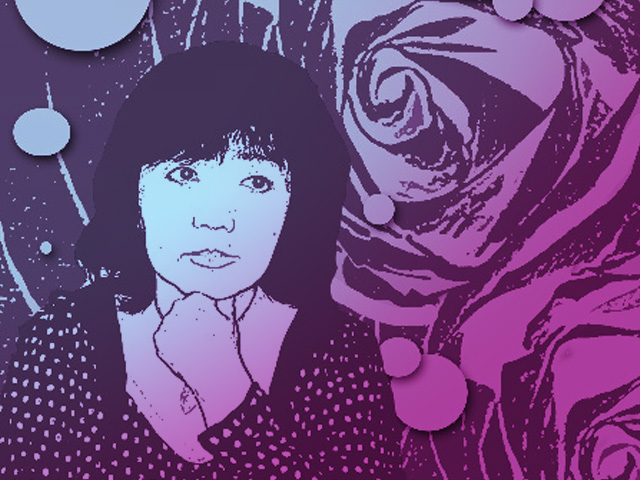 Yuri Kageyama is a poet, fiction writer, essayist, journalist, filmmaker and songwriter of bilingual and bicultural (Japanese and American) upbringing.

“They’ve called Yuri ‘cute’ often during her life. She’s cute all right. Like a tornado is cute. Like a hurricane is cute. This Yuricane. These poems are honest. Blunt. When she says that writing a poem is like taking ‘a bungee jump,’ she means it.” _ Ishmael Reed.

“Through the anguished eyes of a hybrid soul, Yuri Kageyama sees the boundless universe in everyday life. ” _ Shuntaro Tanikawa.

“New and important …. articulate and beautiful …. These poems could never have been written by anyone but a poetess who has gone through the labor Mother Nature imposes upon the one who creates. If not for Yuri’s sensitivity and capability, this book wouldn’t have been born.” _ Yo Nakayama.

“Kageyama’s images, scoured, purged of ornamentation, can have the effect of a stun gun …. The focus in Kageyama’s work is less on beauty, which can be delusional, than on truth. Serious literature, we realize, does not exist to comfort and mollify us, but to unnerve and agitate.” _ The Japan Times.

“The prose is unvarnished, unflinchingly personal and adroit in quickly juggling themes of child abuse, racism and sexuality …. Kageyama’s poems have addressed stereotypes about race and gender roles. They’re made even more powerful when Kageyama recites them with collaborators …. it’s a heady, globalized mix of words and music.” _ Tim Hornyak in “The Many Lives of Yuri Kageyama” in No. 1 Shimbun.

“Kageyama pushes us to think of anger as a way to reconsider racialized and gendered subjectivities, the power dynamics that bind and constrain and that one must resist.” _ Stephen Hong Sohn.

Her published books are: The New and Selected Yuri: Writing From Peeling Till Now (Ishmael Reed Publishing Co.), which includes poems, short fiction and essays; Peeling (I. Reed Press) and The Very Special Day, a children’s picture book with illustrations by visual artist Munenori Tamagawa in 2016, which became a 2019 animation film.

As a filmmaker, Kageyama has also written, directed, shot and edited two shorts, “I Will Bleed” and “Story of Miu” while studying at the New York Film Academy in 2014, in addition to writing and producing NEWS FROM FUKUSHIMA and THE VERY SPECIAL DAY. She also reads in THE VERY SPECIAL DAY.

Yoshiaki Tago shot, directed and edited “Talking Taiko” (March 2010), which documented her readings and thoughts on her art. He is also the director of the film version of “NEWS FROM FUKUSHIMA: Meditation on an Under-Reported Catastrophe.”

Her poem “ode to the stroller” was featured in the Public Poetry Series in February 2015, and published in Tokyo Poetry Journal Vol 5. January 2018.

Her poem “No Gift of the Magi” was a finalist winner in The Cultural Weekly poetry contest in November 2013. A film by Adam Lewis of her reading the poem with bass by Hiroshi Tokieda was featured by “The Cultural Weekly” online.

The still photographers who have documented her readings include Junji Kurokawa, Eba Chan, Chris Chow, Jimmi Dong, Annette Borromeo Dorfman and John Matthews. Graphic designer Ian Lynam did the design of this site.

She donated her time to help with the research and translation for the book, FUKUSHIMA: The Story of a Nuclear Disaster, by David Lochbaum, Edwin Lyman and Susan Q. Stranahan and the Union of Concerned Scientists, New York/London: The New Press, 2014. The Japanese translation of the book by Iwanami Shoten was published in 2015.

Kageyama’s poetry, translated into Japanese, is featured in a 1985 anthology of Japanese-American and Japanese-Canadian poetry published by Doyo Bijutsusha. She has a 1993 book in Japanese co-written with Hamao Yokota on the Japanese workplace. She helped with translating the words of dancer Suzushi Hanayagi for Robert Wilson’s performance piece “KOOL _ Dancing in My Mind,” which debuted at the Guggenheim Museum in New York April 17, 2009. She has also translated works by writer Kenzaburo Oe and poet Hiromi Ito.

As a journalist, Yuri has worked for more than 30 years at The Associated Press, the world’s biggest and most trusted news organization, headquartered in New York. She received the AP’s Beat of the Week award in February 2014, for her report investigating the U.S. military’s handling of sexual assaults in its ranks in Japan. She received the same award in June 2011, for exposing how unprepared the Japanese nuclear industry had been for the tsunami. She also won the NYSSCPA Excellence in Financial Journalism award in 2001, for the “Exploring the Global Economy” series of AP stories. She was also part of the AP team covering the March 2011 tsunami and nuclear disaster in northeastern Japan, awarded the National Press Club breaking news-print category award, the APME award in breaking news and enterprise categories, the spot news award from Deadline Club in New York and the New York Press Club spot news award for newswires.

Her son Isaku Kageyama is a master taiko drummer, who has performed and toured with Yoichi Watanabe’s Tokyo-based Amanojaku since a youngster. A composer, educator, arranger, producer and percussionist, Isaku leads his own taiko group, the Los Angeles Taiko Ensemble, and has worked with a variety of artists, including tabla master Lenny Seldman at Swarthmore College, touring musical Batare, theater piece “Galileo” directed by MacArthur-grant recipient Yuval Sharon and Emir Cerman’s Rhythm of the Universe. In 2017, he was among the musicians for the San Francisco performance of Yuri Kageyama’s NEWS FROM FUKUSHIMA, which became a film honored at several international film festivals. In 2021, Isaku came out with “Kageyama Taikos” from Impact Soundworks, featuring a digital library of his playing eight percussion instruments. In 2016, he performed with The Masterpiece Experience in Bucharest, Romania, and was also featured in Tommy Tallarico’s “Video Games Live: Level 5.” His compositions for taiko include “Rei,” written in honor of his master teacher Watanabe as well as the art of taiko. He has also worked on scores for video games, including “Ghost of Tsushima” (2021) and “Phoenix Force”(2014). His 2009 “Hybrid Soul” features traditional Japanese folk music and other songs with rock/fusion guitar and bass. More recently, he worked on the music for the Netflix animation series “Samurai Rabbit” (2022). Isaku Kageyama has taught taiko at Wellesley, the University of Connecticut, the Quincy Jones Elementary School, Brown University, Cornell University and many other schools, and has led taiko workshops in the U.S., Europe, Japan and South America. A magna cum laude graduate of the Berklee College of Music in Boston. MAT in El Sistema from the Longy School of Music of Bard College in Los Angeles. He is the o-daiko (giant taiko) Champion at the Mount Fuji and Hokkaido, Japan contests.