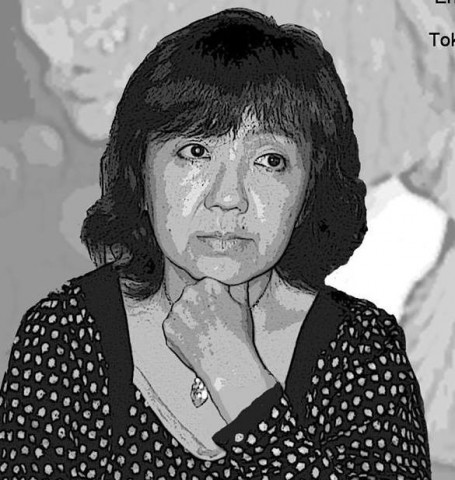 A Bibliography of books, poetry, performance pieces, films and other works by YURI KAGEYAMA: 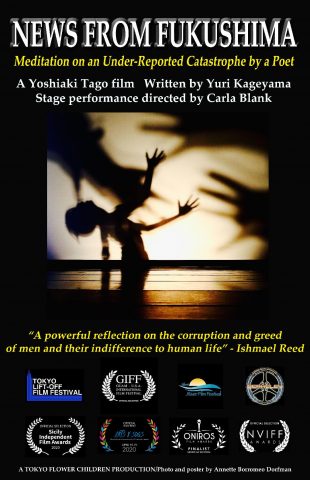 THE FILM VERSION OF ‘NEWS FROM FUKUSHIMA,’ DIRECTED BY YOSHIAKI TAGO, October 2018. (more information at the link) 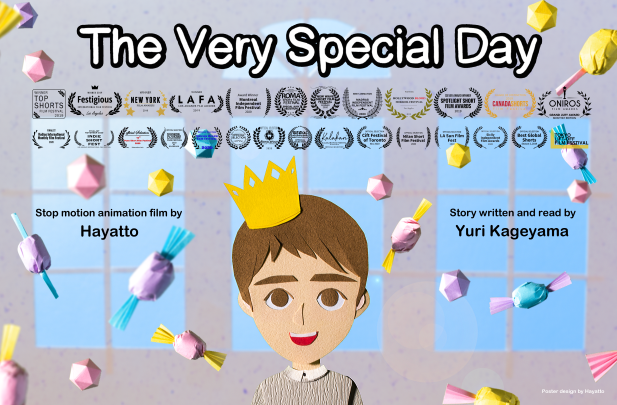 THE VERY SPECIAL DAY is a stop motion animation short film by stop motion artist Hayatto (August 2019) of a story written and read by Yuri Kageyama. (more information at the link)

_ “The Afterlife” and “Asylum” in LIFE AND LEGENDS Twelfth Edition, July 2022.

_ “Virus Diary,” a journal of poetry, music and other thoughts kept from April through May 2020 about the post-pandemic world. KONCH literary magazine’s Special Virus issue June 2020, edited and published by Ishmael Reed and Tennessee Reed.

_ “An ode to the Asian Uncle Tom_ A Yuricane poem (or does power always turn evil?)” KONCH, edited and published by Ishmael Reed and Tennessee Reed, Summer 2018 issue.

_ “ode to the stroller” in TOKYO POETRY JOURNAL Vol. 5, Japan and the Beats, January 2018, edited by Taylor Mignon.

_ “Hands of a Clock,” and “A Crow’s Request,” KONCH, edited and published by Ishmael Reed and Tennessee Reed, January 2016.

_ “Haiku for Homeless,” “Cheap Perfume” and “The Sociology of Hanami (Flower Gazing),” MINUS TIDES INTERNATIONAL _ the Respect and Honor Satire issue, edited by Hillel Wright, June 2015.

_ “ode to the stroller” featured in the PUBLIC POETRY SERIES, February 2015, read by Hirokazu Suyama and filmed by Adam Lewis.

_ “blank spaces over generations,” “The Crooked Smile” and “Why the Japanese Love Michael Jackson” in POETRY KANTO 2014 published and edited by Alan Botsford, December 2014.

_ “No Gift of the Magi” a finalist winner in CULTURAL WEEKLY’S first poetry contest, published in the Nov. 13, 2013 edition. A film by Adam Lewis of her reading the poem with bass by Hiroshi Tokieda was featured by CULTURAL WEEKLY online.

_ “ode to the stroller” and “Little YELLOW Slut” video reading with Hirokazu Suyama, Hiroshi Tokieda and Yuuichiro Ishii at Tokyo Woodstock as part of the Spoken Word on online site POET’S LANE, September 2013.

_ “My Mother Takes a Bath,” THE GREENFIELD REVIEW, The Greenfield Review Press, 1980.

_ “My Sister and The Kite” in Life and Legends, 10th Edition, edited and published by Kalpna Singh-Chitnis, June 2021.

_ “Why the Japanese Love Michael Jackson” in Poetry Kanto 2014, edited and published by Alan Botsford, December 2014.

_ “The Father and the Son,” POW WOW_ CHARTING THE FAULT LINES IN THE AMERICAN EXPERIENCE _ SHORT FICTION FROM THEN TO NOW, Da Capo Press, 2009.

_ “Talking Taiko” (March 2010), directed, shot and edited by Yoshiaki Tago, a  documentation of Kageyama’s readings and thoughts on her art.

_ “I Will Bleed” and “Story of Miu” _ two shorts Kageyama wrote, directed, shot and edited while studying at the New York Film Academy in 2014.

_ “NOTHING HAPPENS,” a collaboration with Sergio Ferrer, July 2022.

_ “I WILL BLEED,” a song for which she co-wrote the lyrics was a finalist winner in the U.K. Songwriting Contest in December 2015, with music composed by Tea and Hiroshi Tokieda. That song and “Oh My Buddha,” which she also co-wrote with Tea and Hiroshi Tokieda, are part of the 2017 Interstellar album, by Tea, a Berklee-educated singer from India.

FEATURED (on the radio and in interviews):

_ Talk with Ishmael Reed and Carla Blank on Fukushima in KONCH, Spring 2020.

_ Voluntary research and translation help for the book, FUKUSHIMA: The Story of a Nuclear Disaster, by David Lochbaum, Edwin Lyman, Susan Q. Stranahan and the Union of Concerned Scientists, New York/London: The New Press, 2014. The Japanese translation of the book was published by Iwanami Shoten Publisher, in 2015.
_ Words by dancer Suzushi Hanayagi for Robert Wilson’s “KOOL _ Dancing in My Mind,” 2009.
_ “Suddenly Mute,” by Kenzaburo Oe, NADIR magazine, 1987.
_ “February Cat,” “A Lot of Fun to Do,” “Probably a Toilet,” by Hiromi Ito, YELLOW SILK, Issue 11, Summer 1984.