I have a new book out: "The New and Selected Yuri" 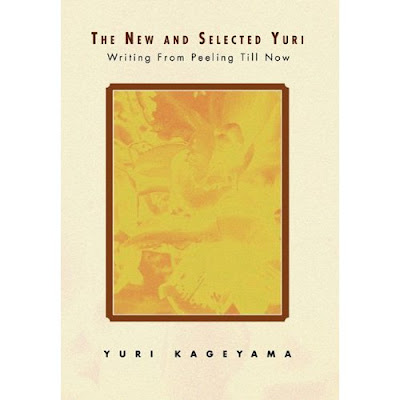 I have a new book out: “The New and Selected Yuri _ Writing From Peeling till Now,” Ishmael Reed Publishing Co. ( Amazon US site hardcover, Amazon Japan hardcover, Amazon US paperback, Japan paperback, and ebooks.)
Reed’s partner Carla Blank, author, performer, director, dance instructor, edited the book and led me every step of the way.
Reed, an award-winning poet, novelist, playwright and professor emeritus at the University of California Berkeley, where I was a student, published my first book of poems “Peeling” in 1988.
“The New and Selected Yuri” compiles the best of my writing _ poetry, fiction and essays _ from the 1970s, including my first poem to ever get published (also by Ishmael Reed) in iconic Berkeley literary magazine “Y’Bird” _ to today.
It is one of those strange happenings in life that has connected me to Reed over all these years.
I still don’t understand it at all.
Reed not only published my new book. He also wrote the Foreword:

They’ve called Yuri “cute” often during her life. She’s cute all right. Like a tornado is cute. Like a hurricane is cute. This Yuricane. I found that out when she was a student at the University of California at Berkeley in the 1970s. One of her poems about iconic white women became an underground hit on campus.
In 2009 the audience at New York City’s Bowery Poetry Club was also blown away by her poem, “Little YELLOW Slut,” a devastating look at the way Asian women are depicted in the media.
The New and Selected Yuri includes poems like this; the manner by which Japanese women are imprisoned behind a “Noh mask,” but Kageyama doesn’t leave it at that.
Unlike many American Gender First feminists,she is capable of understanding how men are also victims of outmoded customs, though they are not dismissed merely as “reproductive machines,” as one minister was caught saying in an unguarded moment. Women should be “quiet” and have bok choy ready when the men come home from
drinking with the boys.
It’s also the women, who bear the miscarriages, the abortions, the rapes, the beatings from a father, who, years later, can’t give an explanation for why he did it. In the United States, the white men who own the media and Hollywood blame the brutality against women on the poor and minority men. White middle class women, and their selected minority women, who want to remain on their payrolls in business,
politics and academia, have become surrogates in this effort.
Courageously, Yuri Kageyama debunks this myth and correctly calls out men of all backgrounds and classes as women abusers. The father who inflicts gratuitous punishment upon his daughter is a NASA scientist.
These poems are honest. Blunt. When she says that writing a poem is like taking “a bungee jump,” she means it.
Very few of the world poets have Yuri Kageyama’s range. Her poems critique Japanese as well as American society. The Chikan. The arrogance of the gaijin, who, even when guests in a country, insist that everybody be like them. Some are erotic. You might find allusions to Richard Wright, Michelangelo, John Coltrane. Music is not only entertainment but like something that one injects, something that invades the nervous system.
I asked writer Haki Madhubuti, what he meant by African Centrism. He said that it was based upon selecting the best of African traditions.
Some of Yuri Kageyama’s poems might be considered Nippon Centric. She wants to jettison those customs that oppress both men and women, especially the women, and keep those of value. The Kakijun, The Enryo and The Iki.
Ishmael Reed
Oakland, California
July 8, 2010

I hope I live up to those words.