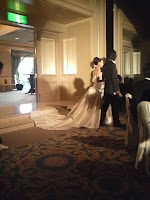 I’ve never liked weddings. I find them frightening.
Weddings are a very expensive performance designed to present an image of a social category called “married couple” that is proper and desirable and safe.
People spend a lot of time planning this performance, putting together slide shows of their childhood, picking out a package of gifts of porcelain and other knickknacks no one wants (though some couples have gotten smarter and instead give a catalogue so guests can pick out what they want but there is really nothing in the catalogue you want either), lining up a list of people to give speeches (the boring ones by bosses and former teachers, the teary goofy ones by friends) or put on horrible amateur acts (that should stay in the karaoke box where they belong).
It is a transition into adulthood _ the straight life.
It is a capitulation to the social definitions of Husband, Wife, Marriage, Man, Woman, Life, Career, Success.
It is often an opportunity for a woman to be the star for once, defined by an alleged beauty in absurd formulaic outfits (white dress, red kimono, etc.) so people can sigh and say oooh, how pretty she is, with the understanding that as she ages she can never quite be as nice-to-look at (i.e., socially valuable) as she is on that blessed day.
To negate or even question any of these definitions of what happens at a wedding so carefully orchestrated at considerable costs would be totally un-Japanese.
Love or whatever it is that happens that culminates in marriage is highly individualistic, private and spiritual.
But you’d never know it from watching the couple descend from a gondola covered with fumes and walk around lighting candles at tables decked with weird flowers and funny food.
Weddings usually show where people are really at _ in the end _ even if they have claimed for years to be more liberated.
They may say they are doing it for their parents.
It is frightening because it means that in the end we can never win against all these definitions not only because they are so powerful as dictated by society, but because they are so close to people’s deepest emotions and values (which what doing it for your parents means).
They are growing up.
They are getting married.
They are leaving me behind.