The Empty Library (from Motherhood Notes) 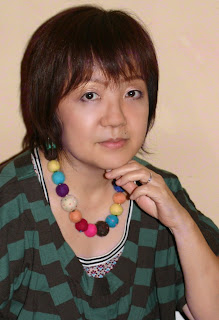 Photo (today) by Annette Dorfman. My column (from way back) in the Hokubei Mainichi:

“I’m Christopher Robin, and you’re Pooh, OK, Mommy?”
Most likely, other 3-year-olds besides ours have the same fantasies. But it is the solitary plight of the non-white in America that the mother must experience a tinge of anxiety about ethnic self-hate. Perhaps she comforts herself that the illustrations of the blond blue-eyed hero in the A.A. Milne classic are black and white ink drawings.
Fortunately I am bilingual, so I can at least resort to Japanese books. Children’s books in English that deal with Asian or Asian American themes are few.
The recent “Wings for Lai Ho” by Genny Lim and “Pie Biter” by Ruthanne Lum McCunn _ both well-written and enjoyable _ are set in historical immigration days. The drawings by Andrea Ja in the former contrast favorably to the more typical and stereotypical versions of Asian features _ not only by Caucasian artists, including Dr. Seuss and Maurice Sendak, but also Asian Americans such as Chester Yoshida for Mei Nakano’s slant-eyed “Riko Rabbit.”
Some works by Yoshiko Uchida take place in Japan, and a rural out-dated Japan at that. For a San Francisco boy of the 80s, whose primary interests range from break-dancing to comic book superheroes, all the above-mentioned stories are as exotic as they are to average “hakujin.”
Gyo Fujikawa is an exception in depicting children in regular modern-day activities such as brushing teeth or climbing the jungle gym, and he draws them with Caucasian, black or Asian physical features. However, aimed for very young “readers,” his picture books do not go beyond the visual impact of UNICEF cards that show multiracial children in harmony.
Taro Yashima’s tender “Umbrella” is another rare example of a modern Asian American story that does not rest on an exotic “foreign” or historical (sociological) theme.
Yashima and Uchida are both award-winning creators of children’s books. Nevertheless, a weakness of language can be sensed in both, that is, in contrast to the power of feeling in the classics of E.B. White (“Charlotte’s Web”), Kenneth Graham (“The Wind in the Willows”), Hugh Lofting (“Dr. Doolittle”), Beatrix Potter (“Peter Rabbit”), L. Frank Baum (“The Wizard of Oz”) and even the sparse, more poetic styles of Dr. Seuss, Shel Silversein or Margaret Wise Brown.
As a so-called “model minority” that has produced its share of coroners, astronauts and senators, Japanese Americans have never boasted cultural sophistication as their strong point. Who are our equivalents of Miles Davis, Martha Graham, Jasper Johns, or even Prince? Our cultural output is low, both in terms of quantity and quality. Never has the tragedy of our cultural vacuum struck me more profoundly than in thinking of our son’s future.
Of course, we struggle. We take him to hear Russel Baba blow his Asian soul out to us through his saxophone. Isaku has already attended concerts by the Nohbuddies, the Asian American Dance Collective, Kei Takei, the Kalilang Ensemble and many others. We are still hoping for a local revival of Philip Gotanda’s “Avocado Kid.”
Asian American culture exists. But not enough to make it easy to teach a growing child that being an artist is exciting, dignified and meaningful. Particularly as an Asian in a country that is not overly cultured to begin with.
Japanese Americans are rapidly assimilating. We are rapidly losing our cultural ties with our ancestral roots. And loss of a unique language is lethal for a poet. (The potency of black English in poetry, drama and prose proves that “language ” here does not necessarily have to be Japanese.) But, instead of weeping over our culture’s diluting into the mainstream, we cheer it on as a sign of our success in blending into a smug oneness with monolithic America.
The poet Ronald Tanaka was one of the first to deal with the problem of audience and the resultant isolation of the Sansei artist. Now a father of two daughters, he is busily writing poems and stories for them to read because, as previously stated, there just isn’t much that really speaks to them.
It comes to this: If the culture to which we wish to expose our daughters and sons doesn’t exist, we have to create it ourselves. Part of my responsibility as a parent is to try to see that my child survives, not only economically, but also as a full human being who is proud of what he is.
The crimes of racism include unequal wealth distribution, askewed employment patterns, disproportionate alcoholism and infant mortality; but the crime of racism is also that it makes us less than human _ not quite human _ for a community without poets (read: painters, musicians, dancers, etc.) is dead.
I am not advocating Japanese American cultural fascism or ethnocentric fanaticism. (Actually such concepts are absurd, given the material reality.) I have not forgotten that America _ the beautiful America _ is multicultural, where each culture enriches the other.
What I want to teach my Nikkei son is the Japanese rhythm of language, the Japanese psyche or spirit, the way we feel, the way we breathe and live. Though I have no easy answers as to what that entails, I believe in my responsibility as an artist and parent because I have to. To me, cultural survival is life or death.