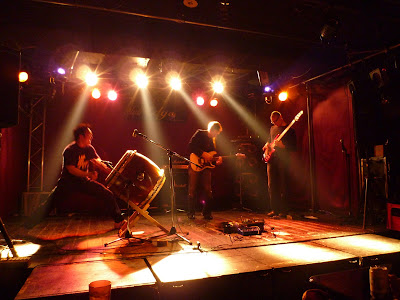 HYBRID SOUL brings together the West and the East/minyo tunes with rock/jazz fusion with Isaku Kageyama on taiko, Pat Glynn on bass and Chris Young on guitar.
And their music keeps getting better and better as evident at Roppongi Edge in Tokyo May 29, 2009.
They play again at the Daikanyama Loop June 4, 2009 _ their last performance for this series that began in April.
They will be starting up another round of concerts later this year, where they will present their further evolution.
Among the songs they play: “Yagi Bushi,” “Tanko Bushi,” “Soran Bushi,” “Nikata Bushi,” “Hachijo” _ and “Dear Prudence.”
It’s moving to see how these men, who happen to be living in Tokyo and love music, have come together.
Meeting one another halfway, they have created something that’s positive _ a new sound that’s fun, intelligent, tasteful.
It is moving because everyone knows that kind of understanding is what this divided world needs.
The music isn’t smug or insular. It is sincere and unafraid. It doesn’t pander. And it doesn’t pretend to be anything that it is not, or even really know what it is yet.