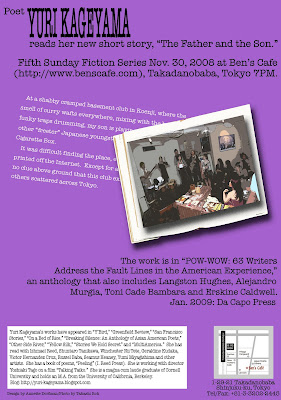 Kageyama’s poetry, short stories and essays have appeared in many literary publications, including “Y’Bird,” “Greenfield Review,” “San Francisco Stories,” “On a Bed of Rice,” “Breaking Silence: an Anthology of Asian American Poets,” “Other Side River,” “Yellow Silk,” “Stories We Hold Secret” and “MultiAmerica.” She has read with Ishmael Reed, Shuntaro Tanikawa, Winchester Nii Tete, Geraldine Kudaka, Victor Hernandez Cruz, Russel Baba, Seamus Heaney, Yumi Miyagishima and many other artists. She has a book of poems, “Peeling” (I. Reed Press). She is working with director Yoshiaki Tago on a film “Talking Taiko” that chronicles her readings with music. She is a magna cum laude graduate of Cornell University and holds an M.A. from the University of California, Berkeley.