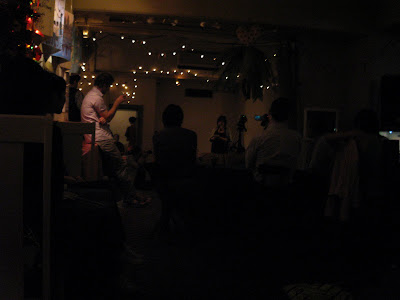 Poet YURI KAGEYAMA presents
The TOKYO FLOWER CHILDREN
in an Evening of Multicultural Poetry and Music
at The Pink Cow, in Tokyo.
June 8, 2008.

Little YELLOW Slut with Teruyuki Kawabata, Haruna Shimizu and Keiji Kubo
Loving Younger Men
an ode to the Caucasian male with Carl Freire
Cecil Taylor
People Who Know Pain with Yumi Miyagishima
Ikiru
SuperMom with Winchester Nii Tete
Excerpt from “The Father and the Son,” short story to be published in “Pow-wow:
American Short Fiction from Then to Now,” Da Capo Press (Perseus Books).
Jounetsu wo Torimodosou Music/Lyrics/Guitar/Song by Teruyuki Kawabata, translation
by Yuri Kageyama, performance by All

Poet YURI KAGEYAMA’s works have appeared in many literary publications, including “Y’Bird,” “Greenfield Review,” “On a Bed of Rice,” “Other Side River” and “Stories We Hold Secret.” She has a book of poems, “Peeling” (I. Reed Books).

Music maker, designer and self-proclaimed “shy and wagamama only child,” TERUYUKI KAWABATA leads CigaretteSheWas, one of Japan’s greatest indies bands. The group has a new CD album later this year.

HARUNA SHIMIZU of CigaretteSheWas fell in love with Ghana’s kpanlogo drum while she was in college. She has kept at it as freely as her spirit moves her.

KEIJI KUBO, who plays didgeridoo and bass, is a linguist and student. He has total respect for aboriginal culture and cultural integrity.

CARL FREIRE is an American writer, translator and musician.