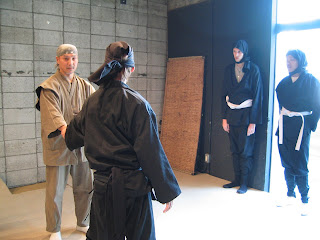 Meeting a ninja isn’t something that happens everyday.
But it’s always uplifting to witness immersion in an endeavor for its unworldly intrinsic worth, not material gain, social status and other mundane purposes.
And the more unworldly the pursuit, and the more mysterious, self-effacing and secretive, like Ninjaism, that point becomes undeniable.
Real-life ninja Masayuki Waki is at a warehouse-like cafe in Kabukicho _ of all places _ to teach some tourists ninja techniques, including escaping grabs, turning somersaults and throwing star-shaped weapons.
He is patient and friendly and utterly professional.
I asked him what determines whether someone is a ninja.
But he said those kind of definitions don’t apply to ninja.
Ninja is a way of life.
And so it’s not like becoming a certified accountant or earning a judo black belt or graduating college.
It’s more like taking the leap of faith.
A ninja could be sitting right next to you on the Yamate Line: The whole point of being a ninja is that it shouldn’t be so obvious.
He says the evil-spirited assassin stereotype about ninja is false.
No one wants world peace more than ninja, he says.
Ninja also have the skills to save lives and help people.
And that could come in handy at any moment in life _ even on the Yamate Line.
Waki, 49, said he began learning ninja techniques two decades ago to use them on his job as a stuntman and fight-scene choreographer for movies and TV.
But he became totally captivated by the ninja world.
As a ninja should be, Waki is nimble on his feet, limber and quiet.
There is an airy quality about him that’s a bit hard to explain, but I’d say Nordic skier Kenji Ogiwara also has that bird-like quality as though his bones were hollow and he can really fly.
Ninja are strong as an individual but not in an aggressive way of self-assertion so they also blend in with the crowd.
Very ninja-like!
Interest in ninja is bigger among foreigners, who are more in tune to the sensibilities/instinct of survival than are “heiwa boke” Japanese, according to Waki.
At a dojo where he trains, about two-thirds of would-be ninja are from abroad.
At the one-day lesson for tourists, he demonstrates how flipping a business card like a “shuriken” can make it travel across the air, while simply throwing it won’t work.
He also notes jewelry and heels can serve as weapons.
And don’t try to finish off your opponent.
That kind of overkill is just asking for trouble.
Just run!