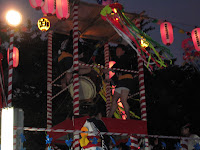 Japanese summers are never complete without Bon Odori, the neighborhood thanksgiving celebration of the harvest, the annual homecoming of ancestral ghosts, the end of summer.
The dress code: cotton yukata kimonos in white, indigo and goldfish red, splashed with bold patterns of flowers, bursting fireworks, waves of water. Wooden clogs or woven straw slippers on the feet. Big uchiwa fans, the kind that don’t fold out gracefully, upper-class, but just stay flat (also with bold patterns) to get flapped around to swat mosquitoes and cool off in the evening breeze.
The smell in the air: Grilled noodles, pancakes and octopus dumplings topped with seaweed and dried fish, peddled at stalls set up like tents, which also sell manga-character masks, goldfish, shaved ice, bobbing balloon yo-yos, chocolate-covered bananas on sticks.
The sound: Deep intestine-curdling thumps of a taiko drum from a stage that’s set up _ just for the weekend.
The drum plays in time to funky songs. Some are minyo folk tunes, but others are pop concoctions, like Tokyo Ondo, which has become the rallying theme song for the Yakult Swallows, and children’s songs like Anpanman or Obakyu Bon Odori.
The drummers play loud and strong.
They strike poses, fling their arms, twirling and throwing their sticks, staccato out rhythms, swinging with the beat.
The dancing goes in a circle around the stage, repetitions of steps, arm moves and turns that don’t require acrobatic skills to execute (although the instructors on stage _ you can pick them out because they wear the same white and blue yukata _ do every move with a certain elegant nuance you can’t imitate without taking real lessons.)
Maybe there are only five, six choreography patterns you have to get in your head, but each song is a little different and so it’s harder than you think.
Most of the time you end up looking totally ridiculous.
Never mind _ the point isn’t about showing off.
The point is about getting down and having fun and doing the best you can.
And knowing another summer is over.
“Oh, this is so much fun,” said Miu, who had never been to a real Bon Odori before, wiping sweat she’s worked up from dancing. “There is something about this place that’s movie-like. It’s surreal.”
Something about those lanterns hung from the poles and around the makeshift stage bouncing in time with the embryonic heartbeat booms of the drum surround that place where we are gathered in a soft, strange glow _ reminding us of both our cosmic isolation and the terrible death that is so always there but telling us all this in a warm, comforting way, like a grandmother telling us a story: It’s going to be OK; there is nothing to be afraid of.
The way I explained it to Miu is that when the moment comes for me to die, and flashes of images like a multicultural slide show play in my mind in a lazy dozing off of death, somehow, I know Bon Odori will be one of those scenes.
My son was just 6 when he played drums with the other children at his first Bon Odori. He was barely bigger than the drum, challenging the drum, until blisters tore his fingers.
He is 25 this year.
It’s not hard to understand why Japanese believe ancestral ghosts come home for Bon.