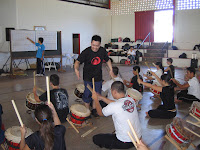 This is a photo of my son Isaku during his previous trip to Brazil to teach taiko, Japanese drumming.
He’s there now with his master sensei Yoichi Watanabe to do more good work.
Taiko tends to be viewed as something for old people in Japan, but it’s totally cool in Brazil.
It’s part of kids’ lives and a music to party to.
My son is learning a lot from Brazil _ and the youngsters there who believe in the same magic of taiko that he believes in.
Isaku writes in his July 6 entry of his blog:
Learning how to teach
Aside from the 100th Anniversary music we’ve been teaching in Marilia, we’ve also been conducting 5th Degree Nippon Taiko Foundation Examinations.
The entry level exams we have been conducting in Marilia test drummers on basic knowledge of music and the history of taiko.
The exams present a high-pressure situation for the kids, because they must perform a piece perfectly as adults, peers and instructors look on.
Today, a boy who had trouble reading music could not perform the piece without making mistakes here and there. One by one, his peers passed the examinations until he was the only one left.
Watanabe Sensei put peers on either side of him so that he could follow them, and told the boy to play the piece again.
The boy, who was now teary-eyed, still could not play the piece.
Sensei shouted “Stop crying! You’re almost there,” and started the piece again.
The entire room was filled with tension, as everyone prayed. All of us wanted him to play the music perfectly.
After he finished playing, Sensei said “Congratulations! Muito bon!” and his friends ran over to him, hugging and patting him on the back. The boy could not hold back his tears.
Teaching taiko is not only about improving technique. It’s about life experiences that will help the kids to be better people. It’s about learning things that will help the kids succeed in whatever path they choose to take in life.
We hope the boy gained confidence in himself. We hope he learned that if you stick with something, good things will happen. And we hope all of us in the room learned something about kindness and caring for others.
As teachers, we try to teach these core values – but that is easier said than done. Today I got to see Watanabe Sensei work his magic, so that someday I may work my own.