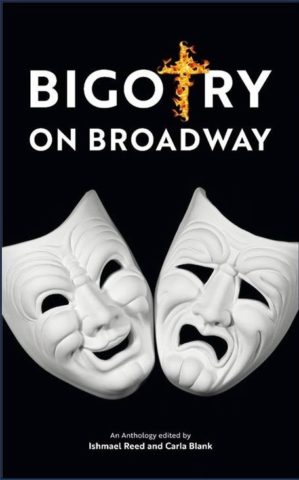 MY CREATIVE WRITING IN THIS NEW BOOK

Great company I keep in this new book BIGOTRY ON BROADWAY, an anthology edited by Ishmael Reed and Carla Blank, Baraka Books, September 2021.

From the publishers on the book cover:

“How do intellectuals and scholars feel about how members of their ethnic groups are portrayed on Broadway? How would we know? Very few of them have the power to rate which plays and musicals are worthy and which are flops, and above all, be heard or read. The American critical fraternity is an exclusive club.”

“Blank and Reed offer an incisive, critical take on Broadway’s past and present; discuss an alternative vision that incorporates the perspectives missing from Broadway; and look toward a more inclusive future. A book for all readers interested in the history of Broadway musicals, theater criticism, and the role of whiteness in Broadway’s misrepresentations.”