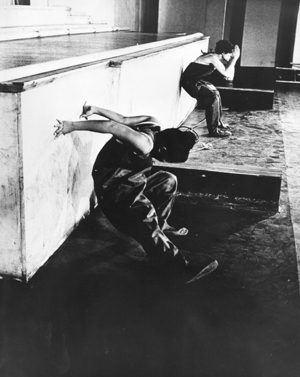 So KOOL at the Guggenheim

The first time I met Suzushi Hanayagi, she was in a wheelchair in a home for the elderly, a frail woman with gray hair, who muttered, grunted and smiled, appearing sweetly lost in her own strange world, happily munching on chocolate-covered cookies shaped like mushrooms that her grandson playfully handed her.
During the 1960s, Suzushi Hanayagi _ who looks more robust, determined and focused in the bespectacled shots I have seen of her past _ ventured alone to New York, in a rather unusual act of courage for a Japanese woman of her generation, armed with training in Hanayagi-school and other traditional dance to forge a new form of modern dance with American collaborators.
One of them was Carla Blank, whom I have known for years. When Blank was in Japan about five years ago, she went to visit Suzushi. She was worried. The changes were already starting to show in her friend.
Last year, Carla was back in Japan again, this time with Robert Wilson, to film Suzushi Hanayagi for a Guggenheim Museum performance piece.
I was there, mainly to see Carla and to meet Suzushi whom I had heard so much about.
I have to be honest: I was depressed.
If she had ever been a dynamic artist, I couldn’t see a shadow of that in the old woman sitting so innocently in the wheelchair, savoring her cookies, nodding agreement, or approval, to nothing in particular, as though she didn’t have a care in the world.
In her prime, Suzushi choreographed pieces for Wilson, performed with Carla in Judson Church and worked with Merce Cunningham, Anna Halprin and Martha Graham. Back in Japan, she performed in avant-garde spaces in Tokyo like Shibuya Jean Jean, but often did classical pieces as a top student for revered dancers like Han Takehara and Yachiyo Inoue.
Suzushi saw dance as part of everyday life, like an extension of her breathing, walking, mothering, all the things she did as a Japanese woman. I would have loved to see the performance piece she did with her toddler son. To her, the barrier that divided art and life held no meaning.
Carla says Suzushi had kept detailed journals of her dance ideas. No one can find those diaries today. So much of her legacy has been lost like wisps and whims maybe still there somewhere in Suzushi’s mind but strangers like me can no longer hope to grasp as concepts.
Carla Blank and Robert Wilson are piecing it all together in homage of this great but largely forgotten Japanese artist, tracking down dance footage, recreating her choreography, translating her words.
“KOOL _ Dancing in My Mind,” it’s called.
“She is still so full of life, isn’t she?” a solidly upbeat Wilson said after visiting Suzushi in the home.
I didn’t know what to say. I mumbled something like: “I am happy you are able to say that.”
But, of course.
Art can only be what the artist perceives and then communicates.
It’s not there until the artist perceives it for you.
And he could see it because he was there and he was part of it and he is an artist.
I have to go and see what Robert Wilson has created with Carla Blank at the Guggenheim for us to see _ a multimedia portrait of the real Suzushi Hanayagi and her Dance.
The piece is not just a documentation of this woman and her work.
It is about what binds people together over time, cultures, fading memories, sickness and aging.
It is about how an artist must see beyond what’s there.
It is about how life, artistic productivity and our time with those we love must end _ and about how they never really end.