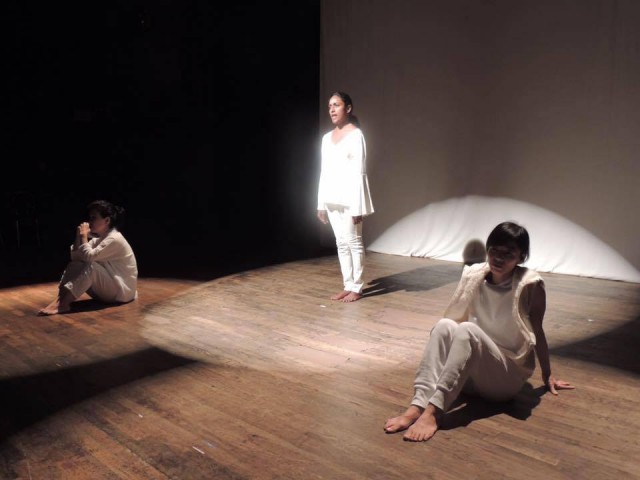 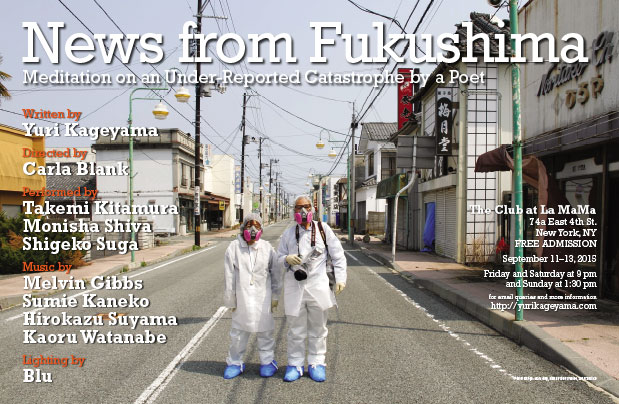 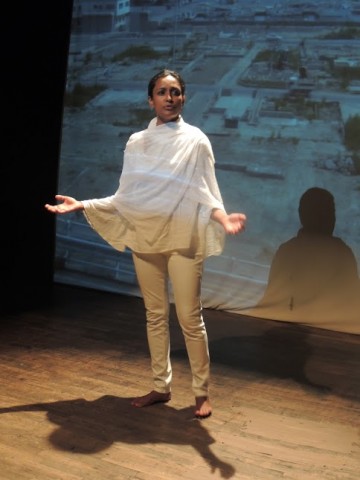 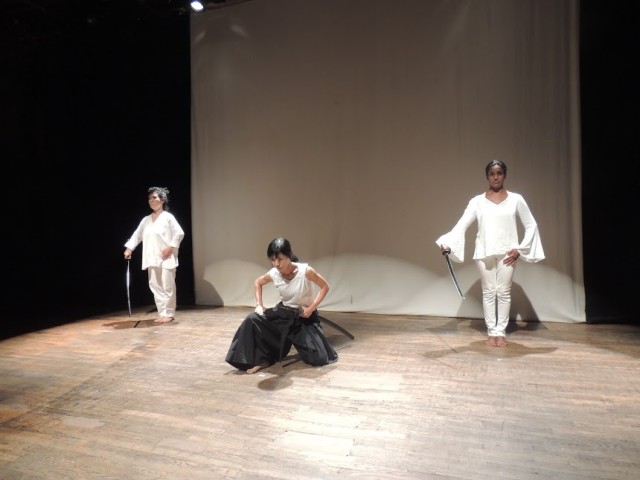 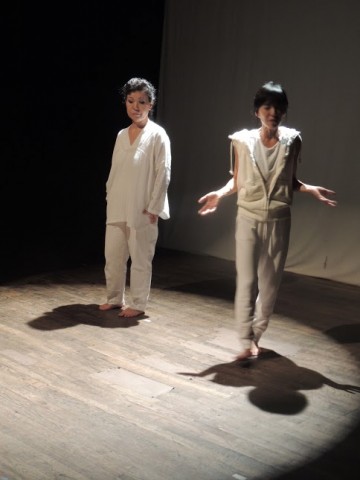 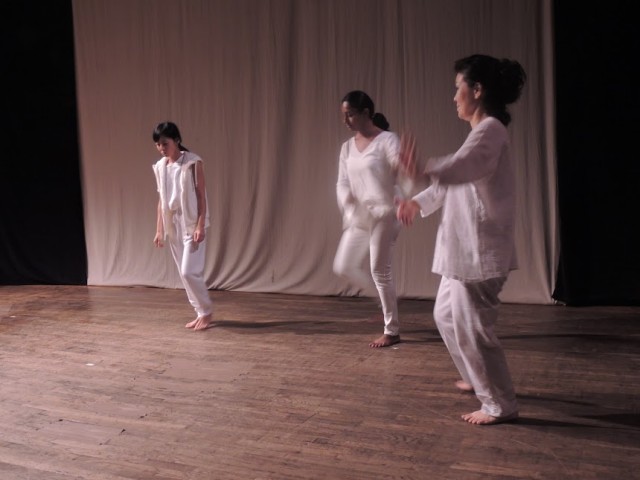 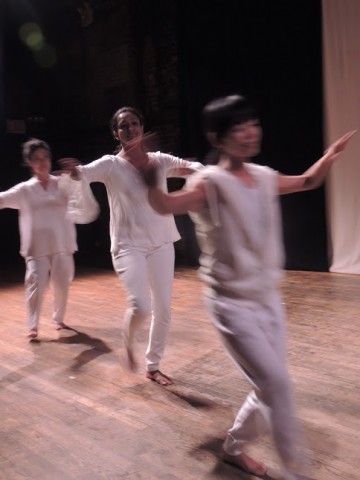 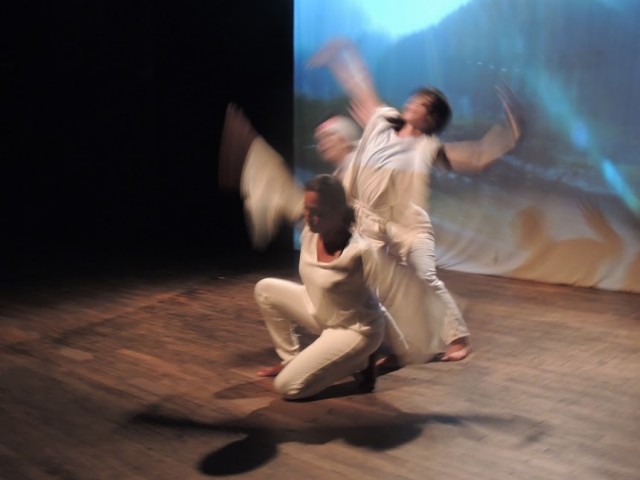 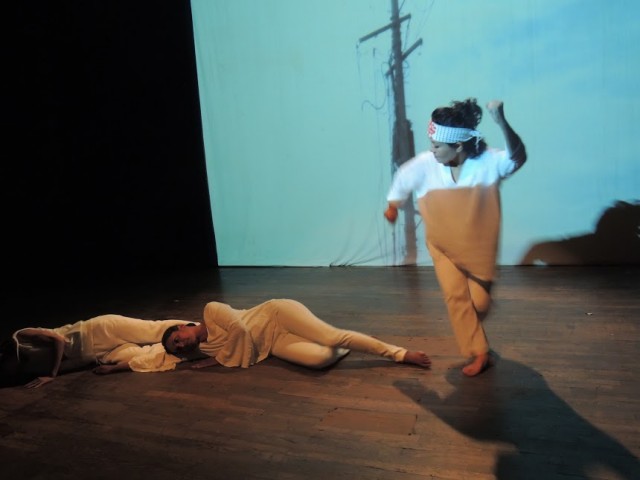 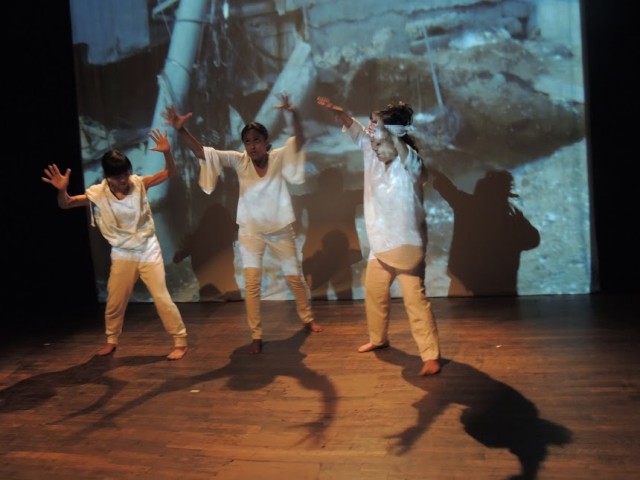 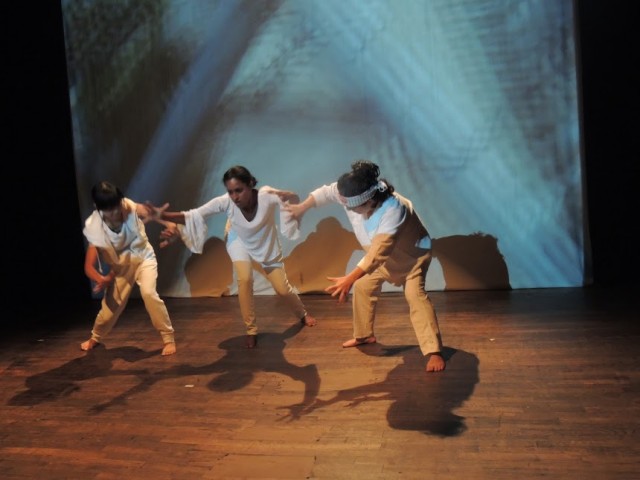 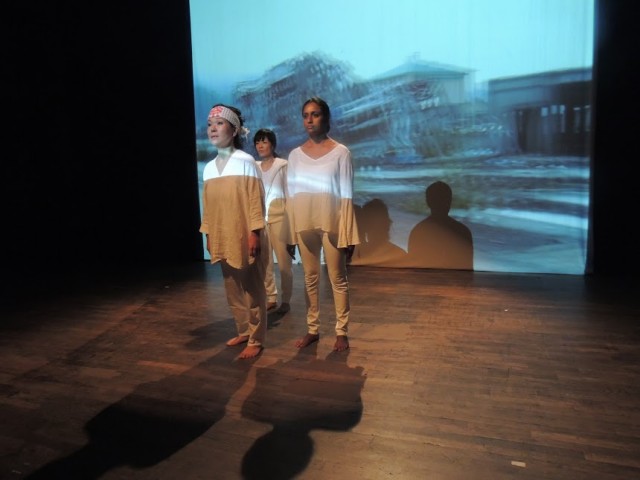 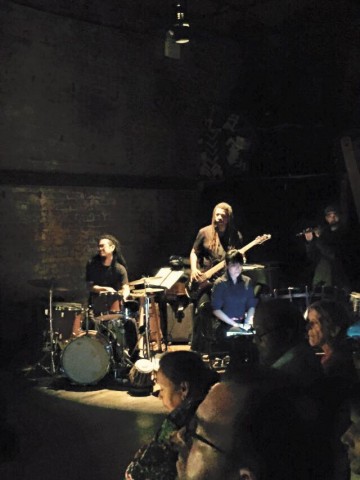 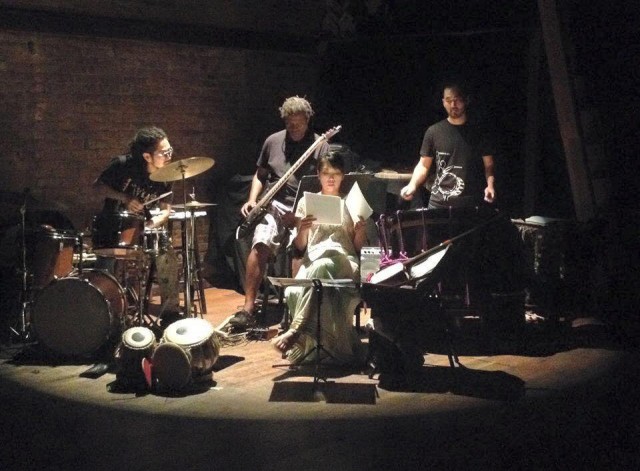 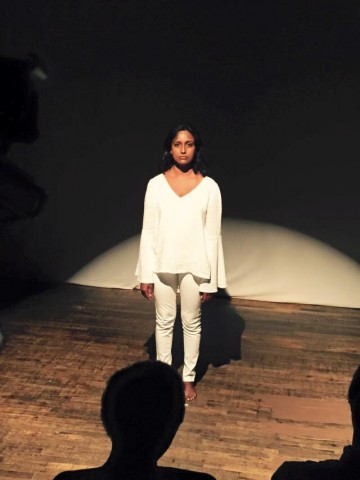 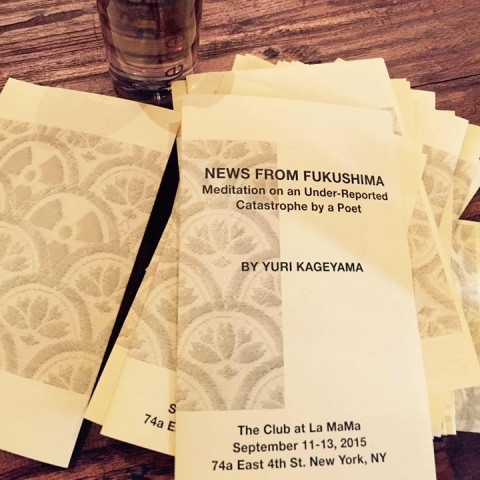 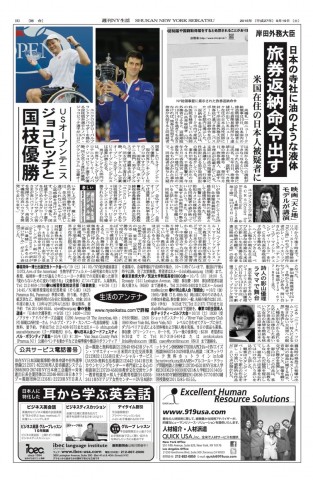 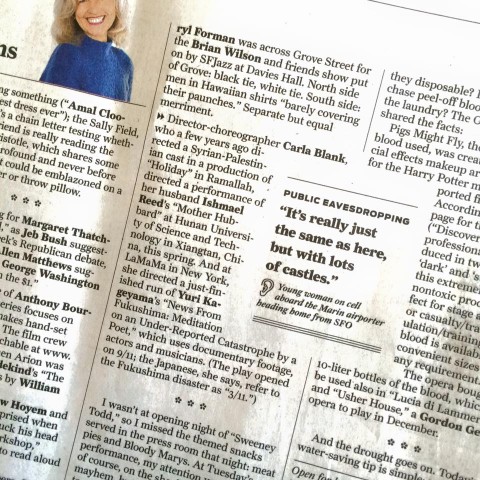 NEWS FROM FUKUSHIMA _ bios and other details for La MaMa in NY.

This pensive and provocative theater work with dance, poetry, music and film from Tokyo-based writer Yuri Kageyama debuted at The Club at La MaMa Off Off Broadway in New York September 11 – 13, 2015. FREE ADMISSION.
Directing the innovative production is Carla Blank, who has recently worked with international casts in Xiangtan and Ramallah, as well as collaborated with Ishmael Reed, Robert Wilson and Suzushi Hanayagi. Performing in the peice were Takemi Kitamura, Monisha Shiva and Shigeko Suga, with music by Melvin Gibbs, Sumie Kaneko, Hirokazu Suyama and Kaoru Watanabe. 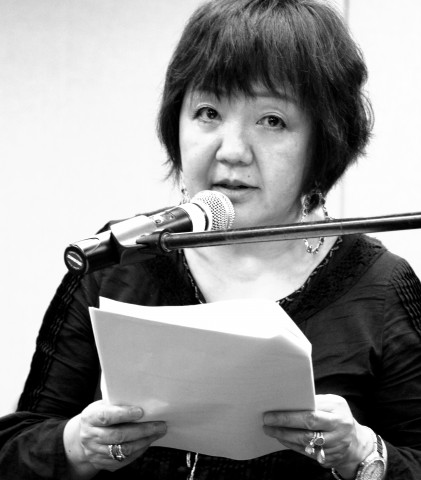 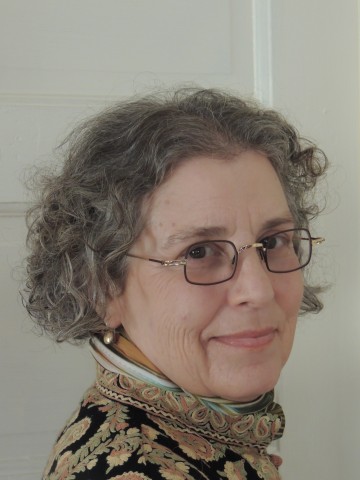 DIRECTOR: CARLA BLANK is a writer, editor, performer, director, dramaturge and teacher of dance and theater for more than 40 years. Her new book is STORMING THE OLD BOYS’ CITADEL: TWO PIONEER WOMEN ARCHITECTS OF NINETEENTH CENTURY NORTH AMERICA, Baraka Books. She worked with Robert Wilson to create KOOL _DANCING IN MY MIND, a performance portrait inspired by Japanese choreographer Suzushi Hanayagi. She is the author of REDISCOVERING AMERICA: THE MAKING OF MULTICULTURAL AMERICA, 1900–2000.

PERFORMERS: TAKEMI KITAMURA is a dancer, choreographer, puppeteer, actor and Japanese sword fighter. Her recent credits include THE INDIAN QUEEN (dancer) directed by Peter Sellars, THE OLDEST BOY (puppeteer/dancer) by Lincoln Center Theater and MEMORY RINGS (puppeteer/dancer) by Phantom Limb Company. MONISHA SHIVA is an actor, dancer, and choreographer, appearing in THE DOMESTIC CRUSADERS and THE RATS for theater and Independent films such as SMALL DELIGHTS, CARROLL PARK, ECHOES and UKKIYA JEEVAN. She has studied not only classical Indian dance but also Bollywood, jazz and samba dancing. SHIGEKO SUGA has acted in more than 100 theater productions, including Pan Asian Rep.’s SHOGUN MACBETH. Acclaimed for her work in New York theater since the mid-1980s, she is accomplished in a range of disciplines, such as flamenco, African drumming, ethnic chanting and Butoh. 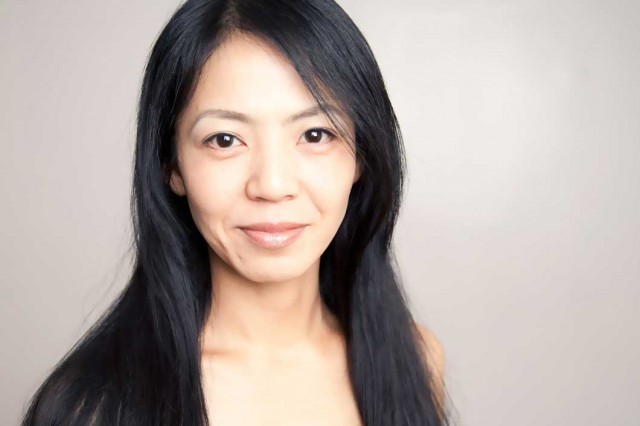 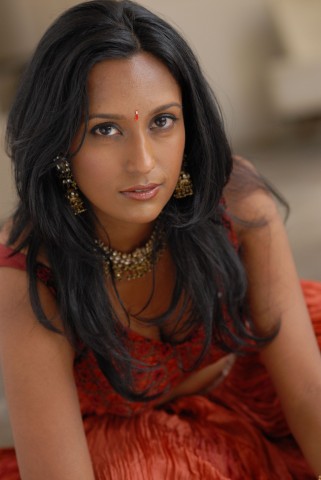 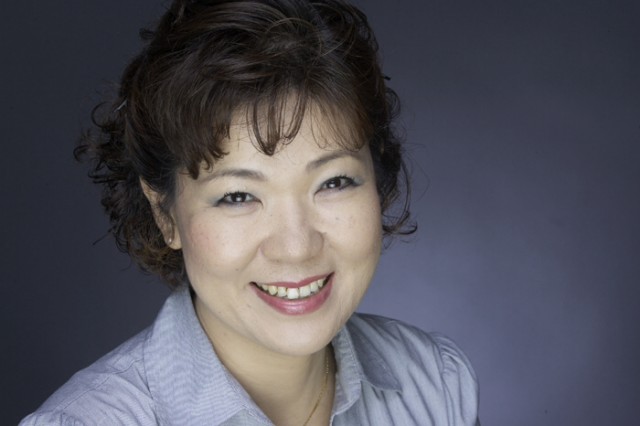 MUSICIANS: MELVN GIBBS is collaborating with Cassandra Wilson on the project BLACK SUN. A member of Harriet Tubman, he was also in Defunkt, Ronald Shannon Jackson’s seminal “free-funk” group The Decoding Society and the Rollins Band. SUMIE KANEKO is a koto and shamisen player, singer and composer, who most recently toured India and Pakistan, delivering her blend of Japan and the avant-garde. HIROKAZU SUYAMA is a drummer, percussionist and tabla player, who studied at the Berklee College of Music with Kenwood Dennard. KAORU WATANABE, formerly of Kodo, masterfully blends Japan’s folk and classical traditions with contemporary improvisational and experimental music. 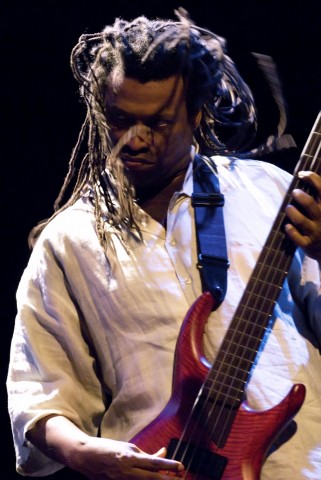 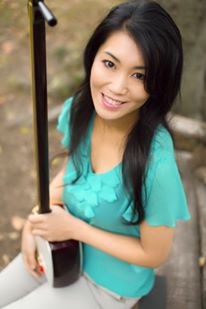 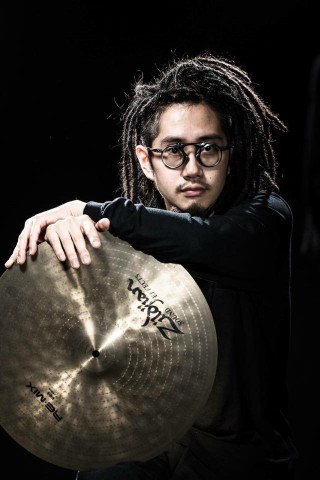 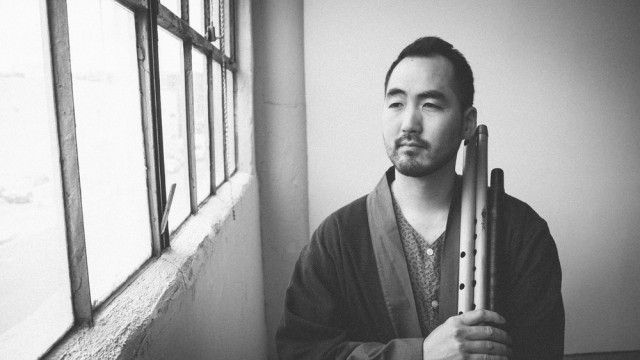 FILMMAKER: YOSHIAKI TAGO directed AFO, WORST CONTACT and other movies, and worked on Japanese TV shows such as TAXMEN. He studied at the film school founded by Shohei Imamura.