At the Bowery Poetry Club in New York SUN April 19, in celebration of “Pow-Wow: Charting the Fault Lines of the American Experience _ Short Fiction from Then to Now,” an anthology compiled and edited by ISHMAEL REED with CARLA BLANK,
YURI KAGEYAMA reads with ERIC KAMAU GRAVATT, TERUYUKI KAWABATA and HARUNA KAWABATA. 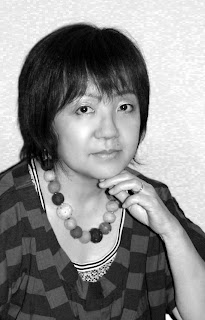 Photo by Annette Dorfman.
I am reading at the Bowery Poetry Club in New York: ISHMAEL REED HOSTS READING OF HIS NEW ANTHOLOGY, POW-WOW.

My short story “The Father and the Son” is among the works in this book.
(Updated with more reviews)

David Ulin of the Los Angeles Times says in his review that Pow-Wow is “big, diverse, messy, all over the place _ just like American literature itself.”

A review from INFODAD.COM:
“This is not a book for those seeking uplift – although a close reading of its Contributors section indicates that there are more positive things in America than these individual writers choose to observe.”
To which Ishmael Reed comments:
“Thanks. The title of my next anthology will be ‘Don’t Worry, Be Happy.’ “

The Buffalo News makes the book its March editor’s pick. “I don’t think there’s been anyone remotely like him as an anthologist,” Jeff Simon writes of Reed. “It’s there, it seems to me, that his service to literature has been irreplaceable.”

Alan Caruba includes it in his March picks, describing the book this way: “A multicultural anthology, it includes a diverse group of writers sharing stories that ultimately transcend race, religions, gender and class.”

In a review in Library Journal, Gene Shaw highly recommends the book. “The United States of the 21st Century is an ocean of stories and peoples, made up of a variety of races, religions, classes, genders, languages, cultures and sexual preferences,” he comments.

“Booklist,” published by the American Library Association says the writers in the book address “what makes American life so vital and contradictory, so cruel and so cherished.” Donna Seaman says Reed and Blank have picked “molten and magical tales that dramatically explore the consequences of our attitudes toward race, ethnicity, gender, class, and sexuality.”

And this review accuses the book of misplaced anger and inadequate quality control.
And this is Ishmael Reed’s comment on that:
“Your reviewer not only misrepresents my anthology,but Affirmative Action as well. According to the U.S.Department of Labor, Affirmative Action benefits whites the most. The guy is a literary shock jock.”

And this from January Magazine: “Pow Wow is an important book.”

POW-WOW: Charting the Fault Lines in the American Experience _ Short Fiction From Then to Now, edited by Ishmael Reed with Carla Blank. Da Capo Press, January 2009. 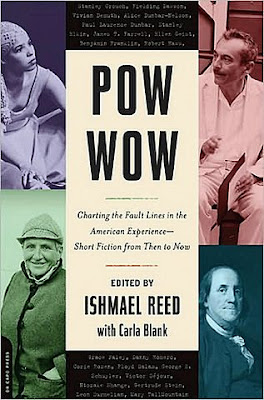