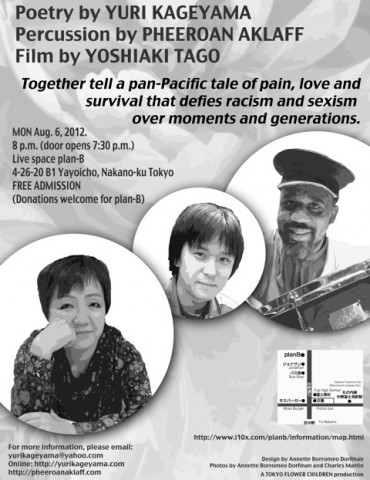 YURI KAGEYAMA, a poet of both worlds Japan and America, American drummer PHEEROAN AKLAFF and Japanese filmmaker YOSHIAKI TAGO come together to tell a pan-Pacific tale of pain, love and survival that defies racism and sexism over moments and generations.

Witness, celebrate and join in this exhilarating crossing of barriers of cultures and genres to debunk stereotypes and find free expression.

Yuri Kageyama is the author of “The New and Selected Yuri: Writing From Peeling Till Now.” Her works, winning praise from literary giants like Ishmael Reed and Shuntaro Tanikawa, appear in “Y’Bird,” “Pow Wow,” “Breaking Silence,” “On a Bed of Rice,” “Konch” and “Phati’tude.” She has read with Eric Kamau Gravatt, Isaku Kageyama, Ashwut Rodriguez, Seamus Heaney, Shozu Ben, Victor Hernandez Cruz and the Broun Fellinis.
http://yurikageyama.com

Pheeroan AkLaff is a New York-based drummer and composer. He has played with Rashied Ali, Oliver Lake, Henry Threadgill, Cecil Taylor, Yosuke Yamashita and Andrew Hill. A headliner at many festivals including Moers and Nurnberg, he is in Japan on the “Dear Freedom Suite” tour with Jun Miyake and Toshiki Nagata. He has led an ensemble dedicated to John Coltrane’s music. He teaches at Wesleyan University.
http://pheeroanaklaff.com

Yoshiaki Tago directed “Worst Contact,” “Believer” and “Maid in Akihabara,” and served as assistant director on many Japanese feature films. A graduate of the prestigious Japan Academy of Moving Images, Tago frequently works on TV shows and promotional videos for pop artists, major companies and government projects. He is documenting Kageyama’s readings with music in a work-in-progress “Talking TAIKO.” 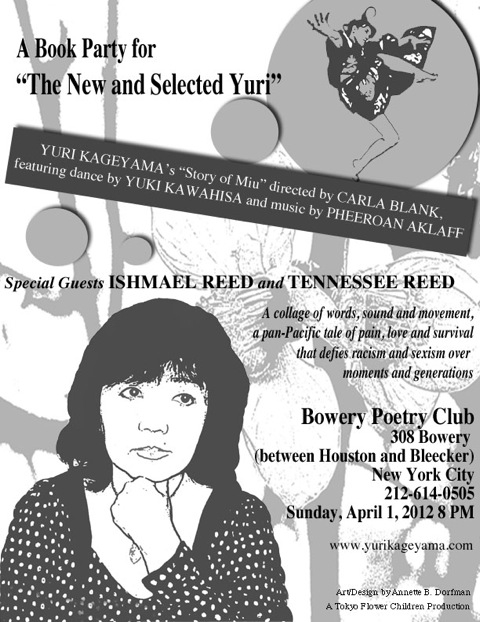