better view and sound courtesy of bassist Craig Harris and more on his Facebook video section.
Thank you Craig Harris. 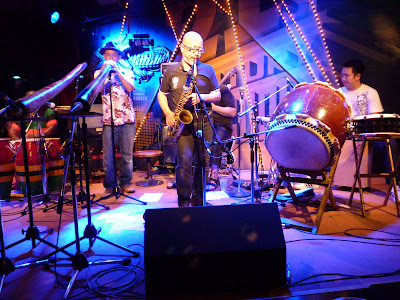 Video from my iPhone at links below just to give you an idea of what happened.

the Music will get better. 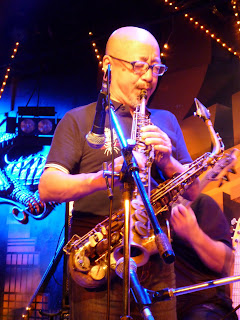 please come to the Crocodile in Omotesando tonight (see previous blog post for details).
follow Isaku Kageyama on Twitter _ @isakukageyama
and claim your free beer tonight:
木曜日に原宿クロコダイルでライブやります。 僕に「ツイッターで見た」と話しかけてくれればクロコダイルビールご馳走します。 http://j.mp/cCTDlM
Playing at Harajuku Crocodile from 20:00 on Thursday the 19th. I’ll buy you a beer if you make it out!
Isaku will be cooking up a melting plot of a hot groove with Japanese sax legend Kazutoki Umezu, master percussionist from Ghana Winchester Nii Tete, bassist virtuoso from the US Craig Harris and a Japanese who plays an aboriginal instrument NATA.
No borders for this batch.

Isaku Kageyama on taiko drums will lead his Mother Earth Orchestra, a multicultural celebration of sound, with Winchester Nii Tete on African drums, Kazutoki Umezu on saxophones, Craig Harris on bass and Nata on didgeridoo.
It’s Great Japanese Music from modern-day Tokyo that follows proudly in the footsteps of the Art Ensemble of Chicago _ an energetic driving groove, where anything goes.
It is funky, fun, free.
And it’s the kind of exhilarating music that makes everything seem somehow a lot easier to bear.
At the Crocodile in Harajuku Thursday Aug. 19.
Doors open 6:30 p.m. Music starts 8 p.m.
6-18-8 B1 Jingumae Shibuya-ku Tokyo
TEL: 03-3499-5205.
3,000 yen admission (drinks, food available but will cost you extra).
For more information, email Isaku at isaku.kageyama@amanojaku.info
Isaku Kageyama is an award-winning taiko drummer and a member of Tokyo-based taiko ensemble Amanojaku, and teaches taiko not only all over Japan but also in Brazil and in the U.S.
He also plays with musicians of various genres, including Toshinori Kondo, Winchester Nii Tete, Seijuro Sawada, Cari, Terumasa Hino and Yoshinori Kikuchi.
He leads his taiko rock group called Hybrid Soul, with Chris Young on electric guitar and Pat Glynn on bass, which is coming out with a CD this year.
The point through all this is to cross musical and cultural boundaries to claim a legitimate and respected place for taiko and Japanese-American music in the legacy of modern art and innovation.
Isaku, 28, was born in San Francisco and began studying at age 6 with Kenny Endo, formerly of San Francisco Taiko Dojo, who now works out of Hawaii and is one of America’s most respected taiko drummers.
Isaku began studying with Yoichi Watanabe of Amanojaku, master composer in modern Tokyo-style taiko, shortly after he began his studies with Kenny Endo.
Isaku Kageyama now performs with Amanojaku all over Japan and abroad, and has done concerts in Rio De Janeiro, Denver, Honolulu and other cities.
He has also taken part in Japanese TV shows with SMAP, Shuzo Matsuoka, Tsunku and the Sumida River fireworks, as well as in TV ads for Aioi Insurance Company.
Follow Isaku Kageyama on Twitter: @isakukageyama
Listen to his music on MySpace: http://www.myspace.com/isakukageyama