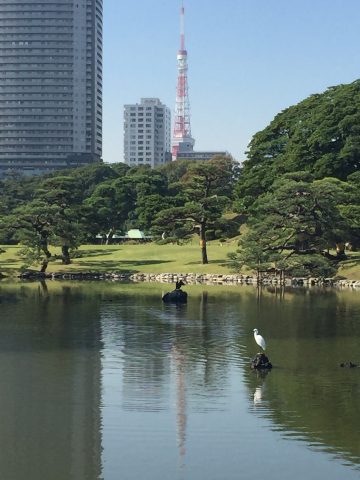 HAIKU FOR SAGIMUSUME _ a poem by Yuri Kageyama 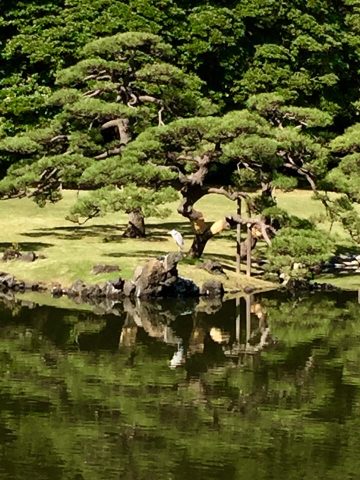 Heron in a Tokyo Park

HAIKU FOR SAGIMUSUME
A poem by Yuri Kageyama

Dance from white to red
A ghostly bride mirrored in snow
Killed by love, she still lives

I saw Kikunosuke perform the Kabuki dance “Heron Maiden.”
I’ve seen the dance by Tamasaburo many times, but this version was special, perhaps because his subdued though utterly elegant interpretation so perfectly highlighted the beauty of the story and the music, or perhaps just because a garden near where I live, Hamarikyu, has herons.
Now, I know they are so still, perched on a rock with their crooked necks, as though they know but don’t care they are forming a perfect picture for an artist, so intensely focused, ruthless in their silence and stillness.
What a bird it is _ and what an image, forlorn and fantastic at once, to depict the love of a Japanese woman.
It is not necessary to have seen herons every day or be a Japanese woman to appreciate this gorgeous theater piece.
But it helps.
And I thank the god of poetry for giving me the gift that allows me to witness how this great Japanese dance and the humble dignity of the heron can transcend the finitude and pettiness of society.

Heron in a Tokyo Garden.

Why the Japanese Love Michael Jackson, an essay by Yuri Kageyama

Why the Japanese Love Michael Jackson
By YURI KAGEYAMA

I should have shouted the question in Japanese when the interpreter failed to tanslate the last part of my question to Ebizo Ichikawa and Kamejiro Ichikawa at the Foreign Correspondents Club.
The question: Given that your children will inherit your family’s artistic legacy, when you choose the woman who is to be the mother of your children, do you (1) look for traits that you think are desirable in a Kabuki actor, (2) listen to what your father recommends, or (3) simply fall in love?
And if so, (4) are you in love now?
The interpreter completely ignored question (4).
He also mistranslated Ebizo’s reply, which was that he would take all those factors into account.
The translator said exactly the opposite.
My story gives Kamejiro’s reply.
Kamejiro was outspoken and witty. What impressed me the most was how like a regular young man he was.
When his father Danshiro Ichikawa went on and on explaining the intricacies of Kabuki theater, he quipped jokingly: “One example is enough!”
Kamejiro got laughs when he reminded his father the interpreter won’t be able to remember all that he said!
When Kamejiro was asked what he wanted to be in his next life, he said he had already completed his incarnation cycles, and he isn’t destined to come back to Earth and will instead stay in Paradise.
When it became his father’s turn to answer, he kept muttering: “Pilot.”
His father did tell the story that he once dreamed of becoming a pilot.
But now, Danshiro said, he will choose to come back as an actor again.
They were such an obviously loving father-and-son team, it was charming.
Afterward, Kamejiro and the two fathers were still in their bluish kimonos.
But Ebizo changed instantly into Western clothes, perhaps to go to his next engagement.
A black ski cap on his head, he walked right past us in a flashy red jacket with golden logo-like marks that were both Kabuki-esque and Gianni Versace _ every inch the superstar that he is.

I try to find time once a year or so to visit Sengakuji, the Tokyo temple where the 47 samurai of the Chushingura saga are buried.
It’s a 300-year-old story that holds a special place in the hearts of all Japanese.
I’ve often heard the comment on how odd Japan must be for admiring such brutality.
You can still see at the temple the well where the ronin washed off the chopped off head of their target Kira.
You can also see the big rock still stained with the blood of Asano Takuminokami, who was forced to disembowel himself in the ritual of harakiri as punishment for his assault on Kira.
But the appeal of Chushingura isn’t about violence for revenge.
It is about the fight for justice.
The ronin withstood ridicule and ostracism, and took great risks as individuals sticking to what they thought was right, to say, “No,” to the abuse of power.
That is so different from the stereotype of Japanese as conformists who bend to the hierachy.
When the samurai march through the streets of Tokyo, Kira’s head dangling from a spear, the crowd comes out to cheer them on as heroes, even though they are outlaws.
I love this scene.
And I love that hyperactive Edo-era reporter with his notebook and brush-pen yelling out his “Extra” about the ronin’s surprise attack on Kira’s estate.
Everytime I go to Sengakuji, I am amazed at how there is a constant trail of visitors.
The incense is burning _ always _ before the stone graves of the ronin, lined up next to each other, as though their death was just yesterday.
The visitors aren’t all old as you’d expect.
One time, I saw a young woman, perhaps a teen-ager, putting a bouquet in front of one of the graves, and I could be mistaken but she wore a cap to hide her loss of hair for chemotherapy.
The visitors always comment on how young the ronin were when they committed harakiri, their punishment for revenge-murder, a violation of Edo law.
The carvings on stone give their names and ages _ Chikara, the son of leader Oishi Kuranosuke, was 16.
But I’m also struck by how some of the warriors were in their 50s, even 60s.
Told again and again in Kabuki and Bunraku plays, countless remakes of movies and TV shows, the characters and their sidebar anecdotes are as real to us as stories about our relatives.
The Chushingura story speaks to us today because it’s not merely about an outdated repressive samurai code or worship of madness-like loyalty as some would have us believe.
It’s a more universal story about individual choice: How to live _ and especially how to die.
It’s a testament to how modern and merchant-dominated Edo society had already evolved.
And so its values were more about human choice, not feudalistic fate.
Precisely because Japan is such a conformity-driven hiearchical political society, even today, the brave men who took a stand will be remembered for having shown individualistic honor and the courage of conscience in a sadly group-minded world.

Japanese stories end a chapter before they would end if they were written in English.
A Chikamatsu play ends with the spectacular double-suicide of star-crossed lovers (climactic death/immediate curtain).
There’s no pretense at an explanation/resolution like the feuding-families-finally-make-up ending that comes in “Romeo and Juliet,” the ending that should reassures us of Truth, Progress and hope for Justice.
In Japan, life and art aren’t about Rationalism/Renaissance-style Da Vinci genius.
Beauty Japanese-style is devoid of Reason.
It is so pure and explosive and mad there’s no logic.
This is what is so deep about being Japanese but also what is so frustrating.
Kabuki actor Bando Tamasaburo observes how the ending comes abruptly in “Musume Dojoji.”
The woman turned serpent tells her life story (she is a young maiden, she falls in love, etc.) and suddenly she climbs on top of a giant bell in a sheer horrific rage.
Her story is so absolute, he says.
Why do we need that obligatory explanation about how her revenge toward the man who spurned her will be inevitably punished by a Just God?
Tonight, I saw a movie of the duet-version of that dance by Tamasaburo and Onoe Kikunosuke.
The movie allows stunning close-ups that show the nuances of their facial expressions, as well as of their different, but equally convincing, character interpretations and dance styles, all of which you can’t experience with the stage version.
I was so taken in by the piece, sitting in the dark half-empty theater (instead of the more well-lit, more croweded Kabuki theater) the hogaku music during the closing credits sounded like funk to my ears.
I am proud to be Japanese.