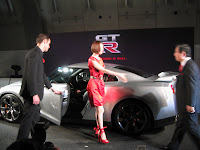 A closed off Tokyo tunnel for that underground (literally) look was where Nissan chose to show off its sportscar GT-R. We stood around for an hour crammed behind a railing with a bunch of reporters and photographers. And finally we got to watch a couple of GT-Rs zip past us. Then actress Ryoko Yonekawa came out of the car.
Easier to get intrigued was Toyota’s violinist robot. Here’s the story, and the video. When the rolling Robina, which looks like a woman in a skirt, signed its name with a fat marker and said in its smooth feminine voice that she (I mean, it) wanted to help people and be a companion, it was almost moving. Toyota says it’s serious about robots. People were skeptical when Toyota showed the hybrid 10 years ago. Now everybody is scrambling to catchup. Maybe Toyota will pull off a repeat scenario with robots?
Yesterday, I was in Yokohama to cover a film festival _ except all the works were shot on cell phone cameras (see photo above).
There is definitely something unique about the art form just because the cell phone is:
_ portable
_ always around
_ interactive
_ personal
The whole thing was more interesting as an idea/concept than as works as such things tend to be. But art getting democratic and immediate is pretty exciting.
It’s also an eye-opener about how disappointingly staid and predictable such attempts can get despite the potential freedom in self-expression.
After watching the works on DVD ahead of my interviews, I was awake late at night and Ingmar Bergman’s “Cries and Whispers” happened to be on cable.
It was astonishing how I remembered so much of this movie, the scenes, the colors, the moods. I watched it to the end. Everything Bergman wanted us to feel still felt new and intimate _ and absolute.
One of the people I interviewed said it’s easy to forget who is taking an image, and cell phone films can counter that.
There’s no such forgetting with Bergman.