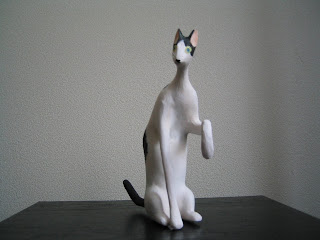 Cat by Mino.
More on the exhibit at Flew Gallery on through March 12.
Get off Sanguibashi Station on the Odakyu Line (two stops from Shinjuku), walk toward your left as you get out of the train station, and look down the alley behind the Seven-Eleven. 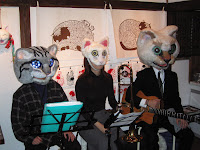 Masks, photos, miniatures, sculpture, prints and other artwork are on exhibit at a tiny house-turned-gallery, tucked away in an alley like a fairy-tale secret.
The theme: Cats.
Even the musicians performing at the opening are cats, wearing fuzzy head-gear complete with glowing LED eyes
Mino on reeds and trumpet, who made the giant cat heads, is one of the exhibiting artists.
I bought a figure he made of a Master Cat, posed in a welcoming gesture.
It has wires for whiskers and a disarmingly wise yet innocent look in its eyes.
Mino, who plays in a band called Kumonosu Quartet (not Kronos Quartet, mind you), seemed happy I bought his piece, though it was a bit hard to tell under the cat head with only his lips showing to play the instruments _ and talk.
“Do you like cats?” he asks, the obvious question to ask in this setting.
“Yes, I do,” I said, relieved I can be honest and have what I think is the right answer.
“Have you ever had (katteta) a cat?”
“Yes, though I don’t now.” Still relatively relieved.
“What kind of cat?” he asks in his soft warm voice, not probing, just expressing proper interest.
“His name was Pyonta, and he was all black.” Yes, he was a beautiful cat, and why hadn’t I thought about Pyonta lately when a cat is so utterly important with all the fascinating features a cat possesses _ so childlike and self-centered and lost in its own world, yet so giving, shrewd, instinctual. So total. But I don’t say those things.
“My cat is a tabby, and the name is Nyangoro,” Mino offers with a smile. “There’s no special reason for the name, except that it cries that way _ nyangoro.”
We share a laugh.
“Do you like other animals? I also like dogs,” I continue. “Some people say people who like cats don’t like dogs, and people who like dogs don’t like cats, but I like dogs and cats.”
Lo, behold, we agree again: “I like dogs, too,” Mino says.
The Kumonosu Quartet play at the Crocodile in Harajuku April 19.
Mino (at left in photo) has an exhibit at Gallery Yoyogi March 31-April 5.
Do you like cats?!?
Neko sukidesuka??!!