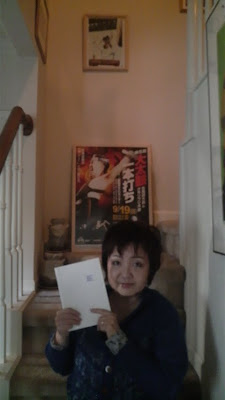 To All who will MoveThatPoem,
Thanks for this book and the spirit that it brings transcending borders of nations and cultures.
I have added my poem and pass the book along to Maku, a poet in South Korea, the best person to take MoveThatPoem to its next step on its journey.
I wish it well and to all that it encounters,
Yuri Kageyama
Tokyo
November 2009 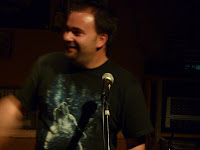 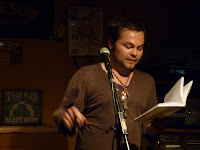 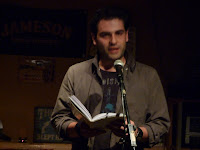 Today, I got “MoveThatPoem,” one of just five books in the world, created by poets from Spain _ Miguel Jose Aniceto Bardisa, Rafel Llobet Deia, and Fco. Javier Barrera Barcelo (seen in photos reading at the Moon Stomp in Tokyo) _ for an experiment into poetry and mobility, to answer the question of what will happen to this book if it gets passed from poet to poet, crossing national boundaries, language and cultural differences, and to see what the power of connection of poetry does to the problems of physical space: “What has happened to the inner journey of the poet,” the poets ask.
“The goal of the MoveThatPoem initiative is to make the poetic object, as the physical object of the project, travel as an independent entity and be transformed thanks to the individual recipient’s interaction with it …. Why poetry? Because we believe that poetry is a universal concept present in all cultures. For this reason, the ultimate concept of the MoveThatPoem initiative does not include any attempt to deal with language barriers beyond the original work, but merely to create a poetic object capable of being understood above its formal level by any person who may have it in hand, a living object that can break out of the literary circles in which it has, on occasion, remained buried, a living object that is consolidated as a site of free expression for whomever so desires.”
I will write a poem in this book and then pass it on, keeping in mind that the book wants to be set free in its world travels.
The journey the book takes will be documented on a special website called MoveThatPoem, which will be up by Oct. 30,
or through email: routes@movethatpoem.com