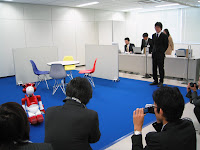 Another photo. Another link.

Some reporters were oooohing that this robot from Hitachi was “kawaii.” It has a cute voice, displayed cute arm movements and wheeled about on its knees, sitting Japanese style, pretty cute. Hitachi invited us to their research center, more than an hour-train ride away from Ueno, so the environment would be controlled (just like their test conditions) so their robot would move properly. Little good that did. As soon as it approached noon, and everyone went on their lunch break like good obedient conformist Japanese salarymen, the network server and wireless got jammed with traffic. And the robot failed to work properly. We had to wait an hour for a repeat of the demonstration. Can you imagine what would happen if the robot was in real-life _ eg., talking to a kid or carrying something delicate _ when it suddenly goes dead? I asked Hitachi officials if they agreed the robot wasn’t practical yet because of the remote-control glitch, they replied, yes. At least, they were honest. They also said the days of pursuing entertainment robots are over. Robots have to be safe and useful, and they have to make business sense, they said.