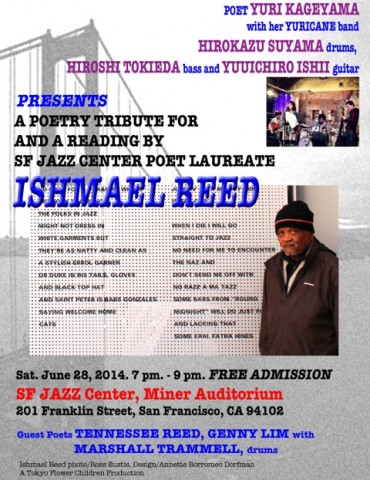 We are putting on a poetry reading with music at the SFJAZZ CENTER in San Francisco to pay tribute to the center’s Poet Laureate Ishmael Reed SAT June 28, 2014.

Ishmael is my mentor and my muse.
He is also my first publisher.
This is my way of saying: Thank you.
Thank you, Ishmael.
Thank you, Poetry.
Thank you, San Francisco.
FREE ADMISSION
The SFJAZZ CENTER at 201 Franklin Street.

Yuri Kageyama’s “Fukushima” A poem with music _ an early version as it was born in a Tokyo garage. On SoundCloud.

ISHMAEL REED, the legendary poet, novelist, playwright, essayist, educator and thinker, TAKES CENTER STAGE AT THE SFJAZZ CENTER in San Francisco, where he is the poet laureate, to read his works in an evening of POETRY AND MUSIC, celebrating his multicultural and multi-format legacy.
MINER AUDITORIUM at the SFJAZZ CENTER (201 Franklin Street at Fell San Francisco, CA, USA)
FREE ADMISSION Saturday, June 28, 2014 7 pm – 9 pm (Doors open 6:30 pm)
Ishmael Reed, one of the most respected American writers today, has fascinated and provoked many. A winner of the MacArthur “genius” award, he has published more than 20 books, including “Mumbo Jumbo” and “Japanese By Spring.” He has recorded the spoken word with renowned musicians. Coming soon is a nonfiction work on Muhammad Ali, “Bigger Than Boxing.”
To his credit, he has also published the works of lesser known writers, including some of his students at the University of California, Berkeley, highlighting voices from minority groups that rarely get mainstream media exposure.
“Ishmael Reed was the first person to publish my poem, and that meant so much to a young poet who felt so alone but had so much to say,” says Tokyo-based poet and writer Yuri Kageyama, who is organizing the tribute for her mentor at the SFJAZZ CENTER.
Kageyama will be reading with her band from Japan, the Yuricane, inspired by Reed’s introduction to her latest book, “The New and Selected Yuri _ Writing From Peeling Till Now,” from Ishmael Reed Publishing Co. The band features drummer Hirokazu Suyama, bassist Hiroshi Tokieda , guitarist Hide Asada and Trupti Pandkar on vocals, who all hail from the Berklee College of Music in Boston. They stand for a new breed of Asian artists, who are not afraid to challenge cultural boundaries.
Tennessee Reed, author of “Spell Alburquerque: Memoir of a ‘Difficult’ Student,” and “Adventures Among the X Challenged,” is the special guest.