behold the egg
a poem by Yuri Kageyama

The Sociology of Hanami (flower-watching)

Every year about this time of the year Japanese _ it seems every Japanese brings out big blue sheets of plastic to sit beneath cherry trees.
The practice of planting cheery trees in rows dates back to the Edo Period, where “hanami,” or flower-watching, started and is depicted in ukiyoe scrolls.
The springtime party was a big equalizer for a culture dominated by the bustling “iki” merchant class _ so different from the stuck-up somber divisive nobility of the previous eras.
Beneath the trees exploding with blossoms, people sit flat on the ground as equals, eating, singing, talking in big voices, drinking, reveling in their equality, practicality and vulgarity.
The branches are foaming with pale pink blossoms, some petals wafting with their sweet scent likes pieces of chiffon.
In contrast, the food smells bad, poorly made sushi, fried chicken and noodles.
Canned beer is guzzled, and the talking is loud.
Only in a strictly hierarchical society would the symbolic equalizer of hanami be so highly valued.
Japanese thrive on the democratic myth of hanami.
Although the purpose of these gatherings is to look at flowers, no one bothers to ask if anyone is really looking.
It is unclear whether people are just pretending to have a good time or they are really having a good time.
Everyone knows there is no such thing as equality in Japan _ a nation where the dumbest man is superior to the most qualified woman, and status is won by seniority and inheritance and personal ties _ not performance or productivity _ and language and mannerisms are defined by where one stands in strictly defined rankings.
In fact, the lowliest one, like a woman or the newly hired recruit at a company, has to go early and mark out the hanami spot beneath a tree with the blue plastic to make sure no other group takes that spot.
Some equality.
The picnic continues into the night.
Too drunk, some people are barely able to stand.
Lovers of group behavior to the max, Japanese come out in hordes during hanami season, the two weeks or so when the cherry trees are in bloom.
No matter that the crowds sitting, in some parks, right next to each other like a commuter train, are nothing but a blight to the scenic landscape.
If you question hanami, if you are not having the ball of your life, you are not a true Japanese.

food for thot
a poem by Yuri Kageyama

japanese cars must be like sushi, tempura, kaiseki
the designer pontificates at a party
to add value and defy the challenge from hyundai of korea
like yakiniku korean barbecue and bibimbap

let’s have a picnic here, mommy, OK?
my son plunks down in the grass
he eats boiled eggs, claiming his place in the japanese family,
believing they are delicious, the best in the world

when will my husband be able to eat again?
my mother asks the doctor, who answers, “never”
after brain surgery, tubes trickle paste through a hole in his stomach
he gurgles in mucus, his eyeballs batty with fright 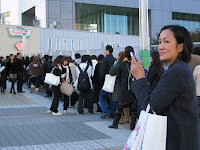 Photographer/visual artist Annette Dorfman from San Francisco is so impressed Japanese will line up for a product sitting around in the frozen food section of a Safeway she is compelled to take a photo.
A new Krispy Kreme opened in Yurakucho Marui (Itocia), where long lines are forming as well.
My story on “gatsoon-kei” food. On the other hand, Annette showed a mysterious penchant for things Japanese that we who live here would find undistinguished.
She bought the new white Shiseido Tsubaki shampoo, tiny figures she thought were cute, “shiso” body soap and other products found collecting dusting on MatsuKiyo shelves.
Human nature is to want hard-to-get things.
Rarity breeds value.
Something to keep in mind when you go Christmas shopping for friends living abroad!

Phallic asparagus, vaginal mussels, ripened fruit, even pepperoni pizza galore, food is sex, blood, delusions and life itself in paintings by Mimi Yokoo.
The meals are spottled with dots of feverish color.
Her brushstrokes pulsate like swirling psychedelic veins.
She uses glitter and beads in some places, playfully plops fake birds with feathers on the canvas.
She sets an elaborate dinner table with such manic prim and proper detail everything on the top half of the canvas is reflected upside down in the bottom half like a mirror into the unknown.
Why is food so sad?
Food and fat and appetite celebrate orgasm, fertility and birth.
But women aren’t allowed to eat.
They stay thin.
And all the food grows dizzyingly larger than life, enticing menacingly, forbidden jewels of desire/hunger/taste.
I went to a gallery opening for Mimi Yokoo’s paintings at Nantenshi Gallery.

Food is symbolic of life. I’ve been a food writer in recent weeks with a story about Krispy Kreme and another about American beef . Seiyu, Wal-Mart’s Japan unit, is the first major Japanese retailer to start selling American beef after a three year hiatus caused by the mad cow scare. My premise is that chains selling fattening food like Krispy Kreme are gaining acceptance in Japan as the nation grows fatter and get used to greasy and rich food like chocolate, ice cream and doughnuts. What kind of a relationship is more like Krispy Kreme vs. whole wheat bread? What is a staple in life and what is just junk?