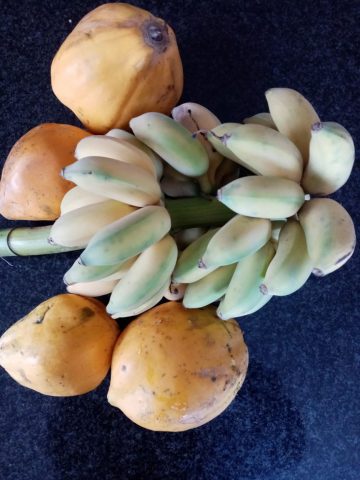 Collaborative Poem by Sandile Ngidi and Yuri Kageyama (still untitled but ongoing; begun in 2020. all rights reserved by the artists.)

Poetry kins us to these basal stems.

Plumes as words dancing in the winds.

Blue-green of their wings play in the light.

Leaves of Grass bend soft with the seasons, shining dew recalling these tears of birth.

Plumes as words dancing in the winds.

Far in the somewhere of dazzling seas,

nothing stops the seasons of fruitful friendships.

Plumes as words dancing in the winds,

Tiny sparrows warble, not in fun but fear,

Over oceans and deserts, swamps and streams,

The now of Dreams connect the All of history, the eternity of Forgotten nightmares.

Across seas the rooster is red,

Crowing in the weeds.

The wind is nightmarish.

A poetry skyline in full sun,

Poetry whispers in tanka and haiku,

After the soft rains,

My epistle is no flower.

She is duped and gets easily used;

She is defiant and easily explodes;

She is vain, obsessed with appearance;

She let herself go, looks fat and shabby;

She is too quiet and can’t speak up;

She is psychotic and can’t shut up;

She is all these things, all at once,

Would you dance naked on your veranda

Beyond the gleam of your silverware, the sun still shines.

Shun the sun if drunk in the polemic of your vomit.

The palm tree is tall still,

An ancient pagoda zooming to a giant moon

She will never come back

She will never look back

At those who have sought to capture her

We hello each other, a morning ritual. He walks into the dew,  whistling with the ancestors. Mapholoba, a sheperd breathing poverty. This dark mist, common as whites walking their dogs. Seeing them pee with glee. Peace. His dogged legs a plea. Ulaka lwabaphansi.

Four an unlucky number, sounding the same as the word for “death,” the 442 has two fours and a two, any even number unlucky, divisible, inevitable separation coming, and Go For Broke they did, from desert Camps, to win what they never had, the right to be American, not an enemy.

Casting a warm eye on this land

my line to kiss her forehead

give her gladness sandwiches

add black pepper to the seasons

good taste into the bowl

a poetry pot firing the broil

the slow dawn of a brighter day.

Taking a lazy walk next to this river

the gulls kiss the tips of the water

I remember my father’s beatings

a poetry pot firing the broil

the slow dawn of a brighter day.

Stratus clouds in the skies

The air was friendly